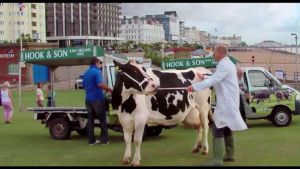 We’re surprised and just a little saddened that this exemplary documentary – a hit with audiences at the Sundance Film Festival as well as Sundance chieftain Robert Redford – isn’t getting a bigger release here.

The Moo Man’s portrait of a small, organic dairy farm in Sussex seems to offer a potential business model for smaller, skilled farms struggling within a loopy industry in which taxpayers subsidise supermarket milk and then subsidise the farmer who, in turn, can’t earn enough for milk. As with the Lalor family’s Kilbeggan brand porridge oats, the moral of the story is that a great, unique product can survive even in a crowded marketplace.

The Moo Man would also, we suspect, speak quite directly to Irish farmers who, generally speaking, have not been as co-opted, homogenised and industrialised as their English counterparts.

Shot over four years, Andy Heathcote’s patient picture centres on Steve Hook, a small dairy farmer who produces and sells raw, organic milk. The man is clearly passionate about his product: “I tasted shop milk once, and it was horrible.”

The business is a family affair: Steve’s dad Phil is still involved and Steve’s wife and four children gather excitedly around the new bottling equipment when it arrives. There is, moreover, an extended family. Every cow in the 70-head herd has a name and, Steve insists, “their own character”. His “lovely ladies” repeatedly and visibly flock around him like puppies: “They almost become a pet – which is the way I do it – and that’s when it becomes harder.”

The most cosseted and stroked animal of all is Ida the Cow, the herd’s resident queen and Steve’s faithful companion.

But this is a dairy farm, not a petting zoo. While Steve is happy to point out that male calves will here enjoy a few years gambolling around the fields when most dairy enterprises would kill them at birth, there are still journeys to the slaughterhouse. He is visibly wistful and melancholic when a sex check reveals a potential bull and is proud that his animals live much longer than most dairy animals. Yet farmers must farm.

Certainly, fewer folks would be troubled by milk consumption if they thought that all dairy producers behaved like this one. But The Moo Man is no kewpie cuddle-fest, either.