The Killing of a Sacred Deer review: unmissable, with a horror that’s unshakeable 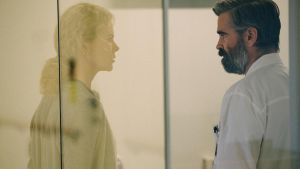 Film Title: The Killing of a Sacred Deer

After the gateway drug that was The Lobster, Yorgos Lanthimos returns to Cannes with the full-strength, unfiltered version of his merciless aesthetic. Developed, produced and financed by the Irish company Element Pictures, The Killing of a Sacred Deer skewers middle-class complacency in similar ways to Pier Paolo Pasolini’s famous Teorema.

Or does it? As in Lanthimos’s early Dogtooth, we are in a world that exists at an oblique angle to our own. Sociological observations don’t come easily. But the film’s nightmarish, Old Testament horrors are unshakable. The Greek director is a true original.

At the film’s uncertain core, two great domestic actors rub queasily against one another. Colin Farrell plays Stephen Murphy, a heart surgeon in Cincinnati, who is carrying on an initially inexplicable relationship with a young working-class man called Martin (Barry Keoghan). He meets him for coffee in the middle of the day. He buys him an expensive watch.

Eventually, Stephen invites Martin to his perfect home to meet his wife Anna (Nicole Kidman) and their two bright children. Anyone who has seen a Lanthimos film before will rule out such obvious solutions as sexual attraction. Something more sinister is surely afoot.

It soon transpires that Martin is the son of a man who died on Stephen’s operating table. Tellingly, at a party, the doctor has mentioned that he gave up drinking a few years earlier. The young man has an appalling bargain on his mind.

Lanthimos is not quite a surrealist, but his universe is sufficiently skewed for the main characters to accept the logically outrageous when it arrives. Lanthimos’s tone is closer to that of Pinter than Ionesco. As in The Lobster, Farrell telegraphs that otherness by delivering his lines in an unsettling blank timbre that makes little distinction between the mildly perplexing and the potentially apocalyptic.

Keoghan achieves his international breakthrough with a performance that cunningly conceals vengeful ambitions behind a disingenuously obliging exterior. He holds his own admirably against such experienced pros as Kidman and Farrell.

There is, of course, no “solution” to the mystery that is unfolding around them, but, should you choose, you could read conversations about the absurdity of Biblical justice into the mayhem. Anne and Stephen come across like unfortunate Leviticans railing against the arbitrary cruelty of an immovable God. Should they resist or should they give in?

Those grand suggestions do, however, sit uneasily with the clinical discipline of Lanthimos’s vision. Long tracking shots take us down cool corridors. The classical soundtrack moves from eerie trills that suggest strings aping the Theremin to pounding chords that occasionally overpower the dialogue. (The inclusion of refrains from György Ligeti, a Kubrick favourite, invite comparisons we will resist.)

The prevailing sense is of a comfortable world being confronted with the universal chaos it daily seeks to ignore. In that sense, Sacred Deer has much in common with Michael Haneke’s Happy End, which it competes for the Palme d’Or, but the Lanthimos film is juicier, gamier and more at home to the unreal.

Some may balk at its oddness. But there is little doubt that it is exactly as its creators intended. A potential prize winner.