The Founder review: supersized tale of the man who made McDonald’s an empire 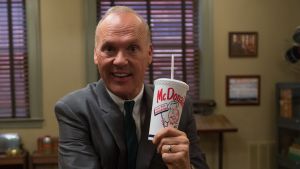 Would you like fries with that? Michael Keaton in The Founder

One of the many pleasures in John Lee Hancock’s study of the man who made McDonald’s an empire is its reminder that even the simplest ideas need to be invented.

When Ray Kroc (Michael Keaton) happened upon the McDonald brothers’ hamburger restaurant in Southern California, he was struck by the simplicity of the menu, by the assembly-line production and by the starkness of the presentation. (At one time, customers actually expected plates.) Kroc also remarks on how splendid the burgers taste.

It is at this point that cynical viewers (those who’ve eaten at McDonald’s, anyway) may begin to suspect a Faustian undercurrent.

So, it proves. But Robert D Siegel’s script finesses its games with great subtlety. Dick and Mac McDonald – played to sweet perfection by those splendid actors Nick Offerman and John Carroll Lynch – emerge as exemplars of honest American toil. They are proud to have built a solid business, but do not yearn for billions. Kroc does not initially seem so different from them.

A salesman for a kitchen supply firm, he signs a contract to manage a number of franchises. Played by Keaton with telling crafty sideways glances, Ray seems genuinely in love with the product and sincerely fond of the brothers. But, as the money slowly accumulates, he begins to subvert their original vision. Almost inexorably, Kroc becomes a driven villain.

Or does he? Unashamedly in love with Americana in its high period – right before Elvis joined the army – the film could also be read as a celebration of entrepreneurial genius. Ambiguity is the pickle in the sandwich. I’m loving it.