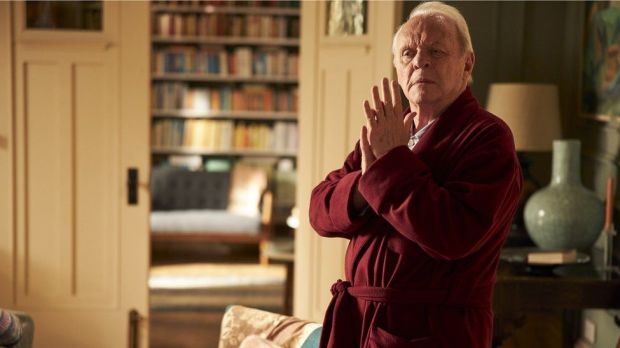 Anthony Hopkins in The Father.

Florian Zeller is something of a sensation in the theatre world, where starry productions of his plays The Mother, The Truth, and The Height of the Storm have been scooping up awards for more than a decade.

With this film version of The Father – a play previously adapted for the big screen in France as Floride (2015) with Jean Rochefort – Zeller has added the Oscar for best adapted screenplay to his tally. Working with Dangerous Liasons screenwriter Christopher Hampton and the brilliant production designer Peter Francis, he has crafted a very moving dementia drama, albeit one that can’t wholly escape its theatrical origins.

Much of the project’s power is derived from Anthony Hopkins’s Oscar-winning central performance. Where previous successful attempts to bring Alzheimer’s to the screen have, like Away from Her, centred on the carer’s experience, The Father distorts and disorients in keeping with its protagonist’s increasingly confused view of the world.

Hopkins plays Anthony, an older gentleman struggling to get along with the various enlisted care assistants who have been sent to his London flat. His daughter, who is variously essayed by Olivia Colman and Olivia Williams, may be married to somebody played by Mark Gatiss or Rufus Sewell. Or she may be about to move to France to be with a man she has recently met.

Anthony is alternatively paranoid, angry, and alarmed by the apparent shifts and changes in his location and the people around him. He yearns to see a daughter who is often evoked yet never seen. He rails against the apparent theft – or rather thefts – of his watch. Overheard conversations and whispering about sending him to a home add to his distress. Against this are moments of clarity, affection and great charm, as a tapdance for Laura, a new caregiver played by Imogen Poots, demonstrates.

Hopkins is a King Lear veteran, and it shows in the unbearably sad final sequence. His angry old man could, equally, be the work of Joe Orton had that playwright lived long enough to engage with that demographic.