Review: It’s pulpy, it’s not deep but this sequel is certainly the equal of ‘The Equalizer’

Trailer for The Equalizer 2 starring Denzel Washington as Robert McCall. 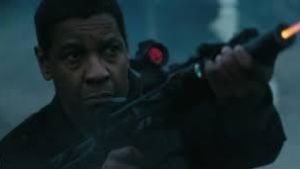 In an age when far too many superheroes are brooding on rooftops, wandering in and out of each other’s movies, and fending off various intergalactic marauders, The Equalizer fulfils a far more straightforward function. He equalises things. It’s an elegant premise. Primal, even.

And in keeping with the 80s TV show that inspired the 2014 film and this new sequel, it’s agreeably pulpy.

As with its predecessor, The Equalizer 2 – hell yes, an honest, old-fashioned numbered sequel – stars Denzel Washington as Robert McCall, a former super soldier with mad skills in some kind of super special ops.

As the film opens, McCall has put his ill-defined past behind him and is working as a Lyft driver, a job that allows him to hear sob stories and to see wrongdoings. That unfortunate intern who is sobbing as she leaves an apartment full of privileged guys in suits? That’s going to get equalised. That elderly Holocaust survivor who is looking for a painting of the sister he lost during the war? That’s going to get equalised, too.

When he isn’t equalising, the widowed Robert is helping his friends and neighbours, and being rather fatherly toward a young graffiti artist played the magnetic Ashton Sanders, Moonlight’s teenage Chiron. For about five minutes, the youngster is in danger of becoming a nogoodnik until he’s given a painting job and a copy of Ta-Nehisi Coates’s Between the World and Me. Who needs thug life when you can have lyrical prose?

Elsewhere, there’s a grander plot afoot, involving Robert’s old boss and pal, Susan (Fuqua regular Melissa Leo) and a staged murder-suicide in Paris. The Equalizer is going to have to equalise hard on this one.

As ever, Denzel broods magnificently, often while looking longingly as his defunct wedding ring. He’s a warmer, chattier hero than the vigilante at the centre of the first film.  The action scenes, particularly a car chase in which the protagonist takes on a knife-wielding assassin through the medium of fast driving, are thrillingly choreographed.

It’s often cheesy and it’s not deep, despite repeated cameos for a copy of Marcel Proust’s In Search of Lost Time, but it is, appropriately enough, the equal of The Equalizer.

Celebrating a society of outcasts: the homeless prostitutes known as Curragh wrens
7