The Age of Shadows review: Breakneck skulduggery in 1920s Korea 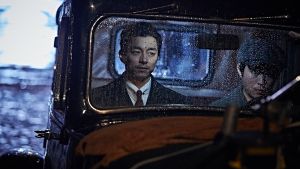 Film Title: The Age of Shadows

Kim Jee-woon’s espionage drama opens with a thrilling rooftop chase, as Japanese police working under Captain Lee Jung-chool (Snowpiercer’s Song Kang-ho) hunt down a Korean resistance fighter named Kim Jan-ok (Park Hee-soon). This is 1920s Korea, where Jung-chool is a soup-taking cop working for occupying forces, and Jan-ok is an old friend who gives his toe – and then his life – to the cause of independence.

Soon after, Jung-chool is tasked with infiltrating the resistance movement as the cell travels to China to buy explosives from Hungarian anarchists posing as antique dealers, a plot point that might seem incredible were it not historically accurate.

Enter Kim Woo-jin (Train to Busan’s Gong Yoo), purveyor of antiquities, who, from the get-go, seems to realise Jung-chool’s real purpose. A classic game of cat-and-mouse ensues, replete with shootouts, brutal interrogation and a rattling chase on a train.

Jung-chool’s rash Japanese partner, Hashimoto (Um Tae-goo), remains suspicious of his colleague. Might he be on to something?

Director Kim Jee-woon is a fascinating talent who has presided over at least one masterpiece (A Tale of Two Sisters), several genre knockouts (I Saw the Devil, A Bittersweet Life and The Good, the Bad, the Weird) and one Anglophone misstep (The Last Stand).

The Age of Shadows, which is loosely based on the 1923 bombing of Japanese police headquarters in Seoul, falls somewhere in the middle. It may not be the helmer’s finest film, yet it darts nimbly and appealingly between its slickly delivered set-pieces.

Even the moments that, on paper, simply should not work – ultraviolence set to the strains of Louis Armstrong’s When You’re Smiling, Ravel’s Bolero playing over the climax – feel pleasing and fresh. The breakneck speed of Yang Jin-mo’s cuts and Kim Ji-yong’s nimble camerawork ensures that the 140 minutes of spy skulduggery flies by.

Patrick Freyne: Homeland is a tool for teaching Americans geography
9

A Winged Victory for the Sullen: ‘There is anxiety all over the world’
Real news has value SUBSCRIBE