Terry Gilliam: “The poetry of cinema has been replaced by the Dan Brown prose of cinema”

Bleak, dystopian futures pervade his work, but, in person, Terry Gilliam is a happy soul who retains an anarchic, irrepressible bounce despite the craziness he sees all around 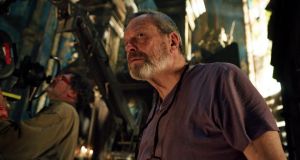 Terry Gilliam on the set of new film The Zero Theorem: “I don’t hate technology. I just hate the religion around it”

‘I’ve been in bed for three days so that I could get myself well enough to actually speak,” rasps Terry Gilliam into his tea. Maybe so. But, predictably, the animator, director and Monty Python alumnus doesn’t seem all that subdued. “I think I got this from my daughter. Children are such bastards, that way.”

At 73, even while nursing an unspecified virus, Gilliam retains an anarchic, irrepressible bounce. He smites his various nemeses – Big Studios, homogenised movie product, the whole shebang – with playful words and garrulous laughter.

“The limitations of the current system mean that all the money goes to the big tadpoles,” he grins. “And there are fewer adventurers among the big tadpoles. They’re a timid and careful lot.”

Gilliam ought to know. He’s been tilting at windmills (sometimes literally) from the get-go. His “lost” films have taken up at least as much of his career as his completed works. Many of these projects – a steampunk parody of 1984 entitled 1884, Time Bandits 2 , adaptations of Paul Auster’s Vertigo , Alan Moore’s Watchmen , Wu Cheng’en’s Monkey , Mark Twain’s A Connecticut Yankee in King Arthur’s Court and Charles Dickens’ A Tale of Two Cities – were left to languish in some unspecified circle of development hell. Others simply imploded. The Man who Killed Don Quixote – Gilliam’s time-travelling Cervantes-inspired would-be epic – was beset by enough misfortunes to justify the feature-length behind-the-scenes documentary Lost in La Mancha .

His completed projects haven’t exactly been a cakewalk, either. The director’s disputes with studio executives on the set of Brazil (1985) are recounted as “the most spectacular title bout in the blood-soaked history of Hollywood” by Jack Matthews’ book, The Battle of Brazil: Terry Gilliam v. Universal Pictures in the Fight to the Final Cut . In a 1985 letter to Sid Sheinberg, then head of Universal Pictures, Gilliam signs off: “Please let me know how much longer must I endure before the bleeding stops. Deterioratingly yours, Terry”.

Three years later, Gilliam’s The Adventures of Baron Munchausen (1989) fell between the cracks of a studio sale, and returned just $8 million of its $42 million budget, following a cripplingly limited release. More recently, actors Johnny Depp, Jude Law, and Colin Farrell stepped in to rescue The Imaginarium of Doctor Parnassus (2009) when the film’s star Heath Ledger died one-third of the way into the shoot.

Elsewhere, there were missed opportunities: JK Rowling wanted Gilliam to direct the first Harry Potter film. But in the end, Warner Bros plumped for the pedestrian Christopher Columbus.

The movieverse hasn’t been nearly kind enough to Terry Gilliam. But he keeps coming back.

“I can take a job anytime I want,” says the director. “But to do what I want to do just gets harder and harder and harder. And it’s so interesting how timid buyers and distributors are these days. There are fewer people working in movies who actually love them. Even the ones who start loving cinema get caught up in easy money and easy choices. So the poetry of cinema has been replaced by the Dan Brown prose of cinema. I was lucky to discover cinema. Movies were always there. But cinema is different. It was around in the 1960s and 1970s. Now you have to go to film festivals to see cinema. It doesn’t trickle through anymore.”

Artistically, Gilliam would, indeed, seem to have little in common with Mr D Brown. A bold, audacious talent, he brings a jumble-sale aesthetic and diseased fancy to everything he fashions. He’s a little bit sci-fi, a little bit Fellini and a whole lot Borges in his disregard for the boundaries between reality and imagination. He touches on big questions previously posed by George Orwell and Max Weber by pitching hapless individuals against soulless machines, cruel systems and the “ . . . craziness of our awkwardly ordered society”. One could never mistake a Terry Gilliam picture for a pipe or an apple.

“I do leave big dirty fingerprints,” he nods.

That must require a degree of control not usually allowed in contemporary cinema?

“I do want as much complete control as I can have in a situation where 100 people are working together. But I thrive on the communal business of making a film. I thrive on creative conflict. I love people who argue with me. I love people who say: ‘What the fuck are you doing, Terry?’ And sometimes even though I know what I’m trying to say I’ll think: ‘Shit, they’re right about that’.”

Given how determinedly idiosyncratic the Terry Gilliam oeuvre is, I’m guessing the films are pretty close to how he envisages them in the first place?

“My joke is that I’m not an auteur, I’m a filteur. Because you start with a plan. And then you run out of money, you run out of time, it starts raining, the actor skews off in a different direction and you go with it. It’s all there. In everything I’ve done. But not necessarily in the same order I once thought. I always know the details. Like when I’m speaking. Me trying to give a speech is always a bad thing. Because I ramble. And I do the same thing with films. It’s only in post-production I can sit down and think ‘Oh yeah, that’s what I was trying to say’.”

The Zero Theorem , Gilliam’s 12th feature as director, once again casts a hapless hero against a monstrous apparatus. The picture stars Christoph Waltz as Qohen Leth, a computer wonk searching for ultimate meaning in chaos and algorithms.

“I think it’s one of the best things Christoph has ever done,” says Gilliam. “So much so that when he walked out at the Baftas I didn’t recognise him from the film. I thought ‘Who’s that guy with the Bing Crosby face?’”

Gilliam trains his suffocating wide-angle lens – known among cinematographers as a Gilliam – on enclosed spaces and such random intrusions as Tilda Swinton’s rapping online psychiatrist and Waltz’s virtual romance with Mélanie Thierry. This is hermetic cinema, even by the director’s entropic standards.

“It was an experiment in working fast and cheaply. There have been numbers out there that are wrong. It cost $8.5 million. Which is not really possible for what you see on the screen. It’s my smallest budget in 30 years. But we were able to do it because all my mates turned up and worked for scale. And because we went to Bucharest for the nice tax break. Where you get to eat horse meat. And we all know the Irish love horse meat, right? Ha.”

Back to those dirty fingerprints. Gilliam has suggested that The Zero Theorem may, together with Brazil and 12 Monkeys , form part of an Orwellian triptych. Like those Gilliam joints, the new film articulates and anticipates the eclipse of individualism by technocracy.

“I’m obsessed with solitude,” says the director. “Because the modern connected world just never lets go. How can you judge yourself or see yourself? It’s peer pressure on a scale that has never existed before. You have access to all the information in the world but you’re concerned only with yourself. Once you’re at the level when you’re tweeting and reading things about yourself and taking photos of yourself, you’re not existing for yourself anymore. And then you’re in trouble.”

Gilliam’s relationship with technology has always been complex. His cluttered films – including The Zero Theorem – present images of humanity besieged by machinery. On the other hand, he does delight in the bells and whistles and is not one for smashing looms.

“I’ve never been an actual Luddite,” he says. “I don’t hate technology. I just hate the religion around it. As I hate all religions. So the film is laden with religious symbolism. We got pigeons and John the Baptist. But a lot of people won’t get those references anymore because they’re not big on the internet. Ha!”

Most authors when pressed, will admit to a degree of Stockholm Syndrome setting in with respect to their creations. Not Gilliam. I can think of no other director who is so relentlessly mean toward his screen characters.

“I know!” he cries with glee. “I’m testing them. Just like Job was tested. I am God. And I going to mess with them. I don’t know why. But I like to see if they have strength and character and resilience.”

Some critics have noted certain similarities between The Zero Theorem and Gilliam’s “Trilogy of Imagination” – Time Bandits, Brazil and The Adventures of Baron Munchausen . But as a seasoned Tel-Addict, I do wonder about the pervading gloom that hangs over Theorem and his last two films, Tideland and Parnassus .

“You whispered when you said Tideland ,” he chuckles. “Everybody does. I think it’s one of the sweetest things I’ve ever done. Why all the whispering?”

I suppose because that film wasn’t as successful as, say, The Fisher King . And maybe because there’s an encroaching sense of mortality about all three films that has left some viewers feeling discombobulated?

“I think that goes way back,” he says. “That started earlier. Munchausen was about a fantasist giving up who is then is kept going by a little girl. Which is kind of like my daughters and me. I remember talking to Maggie [Gilliam’s wife of 41 years] about the awareness of mortality that comes with children. Because mothers can’t afford to die once they have larvae to raise. That’s what I hate about children. I was fearless before they came along. I never worried about myself. Suddenly I was terrified.