Tammy review: much of it is best passed over with a firmly held nose 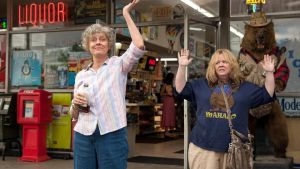 Do you remember the time when a glimpse of Adam Sandler didn’t make you want to drink battery acid? A decade-and-a-half ago, after The Wedding Singer and Happy Gilmore, he seemed to be an interesting comic actor with oodles of potential. A few years later we learnt that – the odd experiment with PT Anderson aside – he was committed to playing the same squawking idiot for the rest of his career.

It would not be entirely fair to view Tammy as Melissa McCarthy’s Big Daddy. There is more (mostly misguided) ambition on display than there was in that unlovely film. However, the breakout star of Bridesmaids really does need to vary her schtick just the tiniest bit. We’ve seen this swaggering, falsely confident boor at least once too often. Nobody is asking her to play Hedda Gabbler, but if she doesn’t do some tweaking, then Sandler status seems like a real possibility.

McCarthy can’t blame anybody else for the familiarity of Tammy (the film and the character). Having co-written the thing with her husband Ben Falcone – who also directs – the star clearly views this as a “personal project”. Even before the comedy begins, viewers may find themselves scratching their heads in bafflement at the cast list.

McCarthy plays the title character, a useless employee at a fast-food restaurant who, within the space of an afternoon, loses her job and discovers that her husband (Nat Faxon) is carrying on an affair with the next-door neighbour (Toni Collette).

So far, so sane. Now pay attention. Allison Janney, who is 11 years McCarthy’s senior, turns up as Tammy’s mum. Susan Sarandon, 13 years older than Janney, plays the title character’s maternal grandmother. This is not the most sophisticated family, but McCarthy and husband are surely not suggesting they are involved in some sort of sordid sex cult. Just to add to the confusion, Dan Ackroyd, very much of Sarandon’s generation, plays Tammy’s long-suffering father. Oh well. At least, you can’t accuse any of the older actresses of undue vanity.

Allowing unfortunate and unflattering comparisons with Thelma and Louise, Tammy sets out cross-country with Grandma Sarandon. The older woman turns out to have a drinking problem and a low tolerance for sexually predatory creeps. Along the way, they get arrested, rob a restaurant and have fun at a lesbian Fourth of July party hosted by Sandra Oh and Kathy Bates.

Large parts of the film’s heart are in the right place. Aware that McCarthy is a good egg, eager to buttress a rare comedy that finds many significant roles for women, the cream of Hollywood has turned out to offer support: Sarandon, Collette, Oh, Bates, Janney.

Unfortunately, nobody has thought to knock the ragbag of bad ideas into a coherent script. As is often the case with contemporary American comedies, passable comic set-pieces are improvised into incoherence and then further into echoing oblivion. The film plays like one long post-credits outtake. Yawn as Tammy takes too long to talk a wounded deer back to consciousness. Shuffle at the endlessly repetitive robbery scene that inspired the teaser trailer. Furrow brows at the puzzling shifts in tone that constantly pull the rug from beneath the audience’s feet. (The middle sequence at Bates and Oh’s pad seems to spring from a very different, somewhat less frivolous movie.)

Someone, somewhere probably thinks that – with its array of female characters – Tammy is an ideal film to release during the World Cup period. The cynicism and sexism inherent in that decision is best passed over with a firmly held nose. Almost everybody has better things to do than endure this rampaging farrago.

How do you know you actually exist?
10