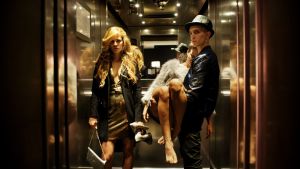 Rome. 2011. As Suburra opens, record rainfall has brought the Tiber’s banks close to bursting, the government is falling apart, the Pope is preparing to step down, and an intertitle promises an impending apocalypse.

We don’t quite get an apocalypse, but we do get a very slick crime thriller set in a ghastly world of ultraviolence and “bunga-bunga”: the Eternal City was almost certainly classier when they were chucking Christians to lions for amusement.

“Darling, don’t wait up. The committee will run late. I’m a little tired,” corrupt politician Filippo Malgradi (Pierfrancesco Favino) tells his wife before joining two prostitutes – one plainly underage – for an evening of sex and drugs. When the minor overdoses, the parliamentarian quickly scarpers leaving the surviving sex worker, who calls a guy. Who turns out to be the brother of another guy: Manfredi Anacleti (Dionisi), a thundering presence in a gaudy villa of chandeliers, crucifixes and squabbling children, and the head of the local gypsy mob.

Meanwhile, a cooler, older presence known as Samurai (Amendola) liaisons between a younger hot-headed thug known as Number 8 (Borghi), a scheming French cardinal, and the unseen “Families of the South”. Samurai is hoping to keep the peace long enough for bought-and-paid-for politicians to push through a piece of municipal legislation that will benefit all of the various crooked parties.

But will this new ‘business opportunity’ be scuppered by events stemming from the politician’s evening of divertissement?

Working very much under the sign of Michael Mann, All Cops Are Bastards director Stefano Sollima has fashioned a gripping genre entertainment, characterised by sleek cinematography, steely blues and brassy golds.

A sprawl of beautifully cast characters –a weasly pimp (Germano) here, a junkie moll (Scarano) there – and their many intersections are deftly juggled, thanks to Patrizio Morane’s darting cuts.

It’s handsomely crafted, redolent of the kinds of crime thrillers they don’t make anymore, and sleekly soundtracked by M83. Still, one can’t help but think it’s a little too glossy: death by crack-pipe and prostitution have seldom looked so glamourous or Brazilian-ed. A touch of the grit that characterised Matteo Garrone’s Neapolitan saga Gomorra is sorely lacking.

In keeping with the crotch-grabbing (sometimes literally) masculine milieu that Sollima – working from a novel and screenplay by Italian journalist Carlo Bonino and crime writer Giancarlo De Cataldo – seeks to depict, the sexual politics are prehistoric. The women, invariably, are wives, high-heeled secretaries, hookers, and molls. Their male equivalents are cardinals, big-wigs and bigger deals. But stay tuned: even in Bunga Bunga Land, a female just might prove capable of autonomous thought and action.

So what is the meaning of Lowery’s existential fable ‘A Ghost Story’?
Real news has value SUBSCRIBE