Styx: Questions of life and death on the ocean

Review: A doctor on a solo high-seas adventure is confronted head-on with the refugee crisis 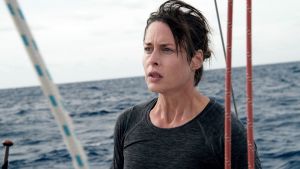 Rike (Susanne Wolff) is a German emergency room doctor, who sets sail alone on a 11 metre yacht. She is headed to Ascension Island, a mid-Atlantic paradise between Africa and Brazil, featuring a jungle that was designed by Charles Darwin.

Director Wolfgang Fischer’s film opens with oceanic feeling with lapping waves and the tactile business of adjusting winches. It could pass for a hypnodoc or trance video until the medic encounters a sinking boatload of desperate African migrants. In keeping with the mythological river of the title, they are somewhere between life and death.

She radios for help but is instead instructed to keep her distance. There’s logic in indifference. Should she approach the trawler and take on the many who are throwing themselves into the sea, she risks sinking her own vessel.

Rike does get the opportunity to help one refugee, a young boy named Kingsley (Gedion Oduor Wekesa), who floats over to her vessel in need of medical attention, which she duly provides. In broken English, Kingsley explains that he has a sister on the doomed ship. He insists that Rike intervene. Repeated radio requests make it very clear that she’ll be on her own.

The moral dilemma at the centre of Styx works both literally and figuratively. Working from a script co-written by Ika Künzel, Fischer’s second feature is so minimalist it makes JC Chandor man-in-a-boat survival drama All is Lost look like Waterworld. DOP Benedict Neuenfels’s crystalline shots of azure waters, gauzy skies and macaques gambolling around Gibraltar only adds to the horrors that unfold (largely off-screen). The film ends unsatisfactorily; it has to.“I have no answers for you. I don’t know what to say. I don’t know what to do,” Rike tells Kingsley.