Even in its relative infancy, the trans spectrum LGBTQ sub-genre already seems to have congealed into a familiar series of tropes 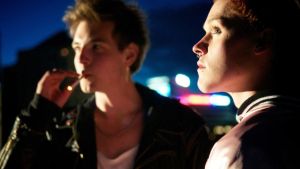 Film Title: Something Must Break

Bad timing doesn’t get any badder. It is rather unfortunate that this Stockholm-set exploration of an unconventional relationship features a knife-play sequence.

Nobody – we suspect – wants to see or hear anything about that particular activity in the current climate.

Unhappily, that scene is rather typical of Ester Martin Bergsmark’s standard-issue non-standard romance.

Sebastian (Saga Becker, excellent) is a wild, young thing who lives between sexes in a stupor of recreational alcohol. His feminine alter-ego, whom he calls Ellie, is increasingly taking over, a process that is exacerbated and complicated by meeting Andreas (Iggy Malmborg).

Andreas may be a sensitive type who seems to love Sebastian/Ellie, but he insists that he isn’t gay and remains utterly bewildered by their mutual attraction: “You’re so beautiful it makes me want to vomit,” he shouts, as the door slams behind him.

Yes, he comes back for more.

The non-gay in the same-sex romance has become voguish in European cinema of late: see also Blue is the Warmest Colour and Floating Skyscrapers.

Bergsmark does good work teasing out relevant ambiguities and contradictions, but even in its relative infancy, the trans spectrum LGBTQ sub-genre already seems to have congealed into a familiar series of tropes. Slapping? Check. Self-loathing in the bathroom mirror? Check. Violent outbursts? Check.

Doors will be slammed.

Saga Becker, though splendid, seems to eclipse everything else in the movie.

His interesting and lively best friend Lea (Shima Niavarani) disappears only a few frames in, leaving the viewer with a whole lot of unalloyed angst.