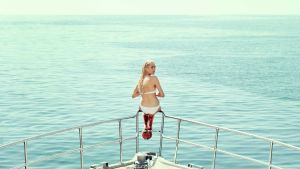 Top Austrian miserabilist Ulrich Siedl doesn’t make sexy seaside films, but if he did, it might look like Isabella Eklöf’s thrilling, provocative tale of coercion, performative femininity and sunshine.

An early scene, in which one of Michael’s minions slaps her for overdrawing her bank account, establishes the menace that underpins their glamorous lifestyle.

As a plaything, Sacha has little to do but sunbathe, float in the pool at Michael’s luxurious villa, and wander around the shops. She’s the youngest, and one senses the most precarious, of the molls on the scene, with little to contribute at the dinner tables where Michael and his cowed associates gather.

The terror unfolds in long, sunny shots that stalk or dwarf the central character

“Everything passes with time, and then we’re just dead,” Michael tells his girlfriend. Ever the villain, even the advice he gives sounds like a threat. When one of his thugs displeases him, Michael thrashes him in the basement; Sacha sits among various mobsters’ children as the howls reverberate around the house.

The moment Sacha begins a brief flirtation with Thomas (Thijs Römer), a Dutch man with a boat in the nearby harbour, tragedy seems inevitable.

The terror unfolds in long, sunny shots that stalk or dwarf the central character, leaving us to wonder what can Sacha be thinking. Or is she thinking? Is she too vacuous to anticipate what’s coming? How can she stay with a man who rapes her? Victoria Carmen Sonne’s performance keeps us guessing until the surprising denouement.

The gauzy cinematography, languid pacing and glossy resort backdrop somehow add to the overall distress and the vice-like grip of the drama. This is a film where broad daylight never feels safe.

Danish writer-director Eklöf, who co-wrote Border (another of this year’s best releases), has arrived with a bang.