The Chambermaid: A perfect, cinematic sketch of a working life

The official trailer for The Chambermaid, directed by Lila Avilés. Video: BFI 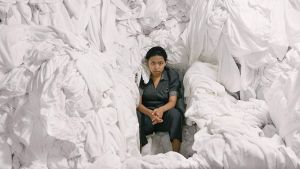 Gabriela Cartol in The Chambermaid

Every now and then, one is taken aback to discover the unlikely source material for a film. Lila Avilés has adapted her excellent, highly original debut feature from her own stage play. One would scarcely be more surprised to learn that Transformers: Age of Extinction had been adapted from a book of nature poetry.

Too often we equate the word “cinematic” with vast panoramas and orchestral crescendos. The Chambermaid takes place within enclosed spaces. The story progresses incrementally. The film’s late narrative swivel happens so slyly that it is easy to miss. Yet The Chambermaid is every bit as “cinematic” as any Fast & Furious flick. No trace of the literary or theatrical remains in Avilés’s long takes and snatched, blank dialogue. The picture wraps a whole world around us.

Rigorously researched and subtly acted, The Chambermaid follows Eve (Gabriela Cartol), a worker in an upmarket hotel, through a few days of everyday traumas and minor catastrophes. Over the decades, conventions have emerged for the depictions of such naturalistic working-class stories. The camera tends to be mobile and handheld. The editing is as choppy as real life. Avilés comes from a different place. Carlos Rossini’s wide-screen cinematography unfolds in long, steady takes that complement the constant hum of hotel machinery. The unsettling ambiance contributes to a sense that, as quotidian routine unfolds, we are drifting towards some disaster, which may or may not happen. We just expect such things of movies that shift around ordinary people at the wrong end of capitalist hierarchies.

Avilés further increases the unease by containing every second of the action within the hotel. Anybody who has stayed (or worked) in such a place will recognise the bland, unchanging formal luxury of the interiors: those brown throws, those flat-screen TVs, those tiny bottles of unguent. For those whose ears are not attuned to variations in Spanish-language accents this could be almost anywhere on the planet. It is Mexico City, but nothing about the building distinguishes it from similar establishments in Los Angeles, Lima or London. This is negative space.

The film admits there are employees who have it worse off than Eve. Her immediate managers are largely friendly and the work is, at least, carried out in sheltered surroundings. But she is never away from some small indignity: cleaning a mysterious brown stain on a bathtub, mechanical dismissal from well-off patrons, panic when she bleeds on a duvet cover. We suspect that a friendly relationship with a young mother – who asks Eve to mind her baby when showering – will last only as long as she is needed. Most wearying are the small battles that must be fought to gain access to the next rung on a short ladder. Eve’s modest ambition is to be appointed to the most luxurious floor in the building. The slightest complaint will keep her where she is.

Avilés has clearly spent time in this environment. One of the film’s lesser pleasures is the detail it offers on how Eve’s job is done. Learn how to smooth a pillow to uniform shape, and what happens to the charger we’ve all lost in a hotel. The Chambermaid is also good on what services a union can offer – notably educational classes – and how easily they can be removed.

The film is, however, most remarkable for its gentle teasing out of workplace relationships. Cartol finds interesting angles on a sometimes blank character. Teresa Sánchez eats up the screen as a colleague who, like too many people in this world, imagines herself to be as gas as she is crack. One bafflingly inappropriate, discrete incident aside – you’ll know it when you see it – The Chambermaid offers the perfect sketch of a life that regards the acquisition of an apparently abandoned red dress as a reason to keep striving.