The Art of Racing in the Rain: A baffling, erratic shaggy dog story

Review: There are so many weird things about this film. Yet none of them matter 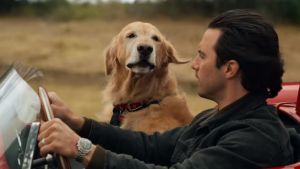 Film Title: The Art of Racing in the Rain

When people use the phrase “critic-proof movie” they’re usually referring to something like The Lion King making a gazillion dollars despite poor reviews.

Well, those folks haven’t watched The Art of Racing in the Rain, a film so erratic and baffling that it will send the most mouthy critic gibbering into the nearest corner, in the throes of existential madness. As they are carted away in a straitjacket by wardens carrying giant butterfly nets, they’ll yell: “The terminal illness subplot is so poor! And it’s all one giant advert for Ferrari!  Even the title is horrible!”

But the dying dog! Right?

The Art of Racing in the Rain - Official Trailer

There are so many weird things about The Art of Racing in the Rain. Yet none of these things matter because right there, in the opening moments, they bring out the big guns: a dying canine lying in a puddle of his own making.

It doesn’t matter that the dog is voiced by Kevin Costner at his most folksy and that much of his incessant voiceover is comprised of – wait for it – life lessons gleaned from watching Formula One. No, really, it is. Think dumber fortune cookies for gear-heads; think screwier Dianetics; think “that which you manifest is before you”.

But the dying dog! Right?

Working from Garth Stein’s bestselling novel, screenwriter Mark Bomback walks us through a philosophising dog’s life. On a whim, cheerful aspiring race-car driver Denny (Milo Ventimiglia, charming in a role often shot from dog’s-eye low angles) scoops up a puppy he calls Enzo. Together, they run, frolic and watch reruns of old races and occasional documentaries about Mongolia until they are joined by Eve (Amanda Seyfried) and eventually Zoe, Denny and Eve’s daughter. And then there’s a cancer diagnosis and a custody battle and all kinds of random plot devices.

It’s so ramshackle you half expect the film to slide off the screen. But you couldn’t say it was dull. Did we mention the dying dog?