The Last Black Man in San Francisco: Nothing much like it out there right now 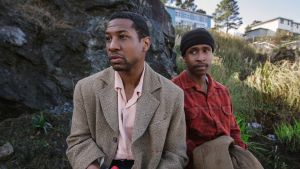 Towards the close of Joe Talbot’s haunting reverie on contemporary urban discontents, we briefly meet a young white couple on the bus. They’re not happy with the state of San Francisco. “We came here for Janis and the Airplane,” they say while snorting at what they found instead. Jimmie Fails is not having it.

The film’s protagonist – playing a loose version of himself – explains that you can’t hate San Francisco without once having loved it. That makes sense. It requires engagement with any great city to understand where it went wrong.

This late conversation confirms that the Bay Area still struggles with the cultural hangover from a few months in 1968. One imagines residents can go weeks on end without considering the Summer of Love, but its influence has never gone away.

Jimmie Fails is, for instance, still living with the consequences of post-Love gentrification. Now working in a nursing home, the young African American man retains a passion for the grand Victorian house that his family took over in the 1940s. The mansion in the Fillmore district, which his grandfather claimed to have built, now belongs to an older white couple who – bohemian of manner and dress – were probably among those placing flowers in hair while recreationally “dropping out”. Fails resents how the house has been neglected and he turns up unannounced to paint scuffed window frames and frown at the untended plants. When the residents appear to lose possession, he and his writer pal Montgomery (Jonathan Majors) decide to squat.

The first hour is a wonder of dreamy poetry. Emile Mosseri’s exemplary original score – swelling horns and complementary strings – adds timeless ambience to sweeping images of a city that never fully escapes the maritime haze. Talbot is equally cunning in his use of pop music from the era that San Francisco can’t live down.

There seems a conscious effort to dampen Jefferson Airplane’s Somebody to Love as Jimmie skateboards the famous hills. It would be easy to turn the sequence into a steroid-pumped thrill-ride, but the sound design invites ambivalence about that acid-soaked record. In contrast, Joni Mitchell’s Blue, a song that acknowledges the hippie come-down – “acid, booze and ass, needles, guns and grass” – is enhanced and improvised upon as the characters interact in changed communities.

All this is to a political end. The film has much to say about how African-American people have been edged out of the neighbourhoods they helped create. Very occasionally those points are hammered home with a lump hammer. Finn Wittrock’s turn as a cynical, exploitative estate agent (what else?) could hardly be any broader if he were an antagonist from the musical Rent.

For the most part, however, The Last Black Man in San Francisco employs an oblique wit to make its undeniable arguments. Jello Biafra, veteran founder of The Dead Kennedys, turns up as a smug tour guide who dares to correct Jimmie about the history of his own neighbourhood. And so on.

Adam Newport-Berra’s spooky cinematography and David Marks’s lolloping editing make their own points. One stunning sequence that finds the heroes exiting a bus into foggy misery confirms the team’s dedication to cinematic effect in an age of small-screen dominance.

The film does lose discipline in the slightly overextended second hour. A film that got by perfectly well on atmosphere is asked to accommodate more plot than it requires. A play within the film makes its points too explicitly. But Last Black Man never loses the sweep and seduction that won so many admirers at Sundance towards the start of 2019. Fails and Talbot’s writing follows no script doctor’s convention. The direction reveals no obvious influences. There is, in short, nothing much like The Last Black Man in San Francisco out there. It should be treasured.