Event of the Week: Horrorthon 2019

Irish Film Institute brings Little Monsters, Colour Out of Space and more to its screens 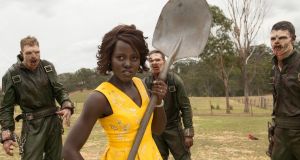 The most appalling event in the Irish Film Institute’s calendar is, perhaps paradoxically, also among the friendliest. There is always a great spirit of bonhomie at the annual Horrorthon bash. Everyone is some sort of expert. Everybody is up for a good bad time.

The organisers have scored more coups than usual this year. The opening film will be Abe Forsythe’s already much-admired Australian zom-com Little Monsters. Lupita Nyong’o stars as a kindergarten teacher protecting her charges from yet another incursion by the undead. It’s a familiar theme, but early reviews suggest the film-makers have found fresh angles. “Is this Bergman? Fellini? George Romero?,” the Wall Street Journal asked itself. “No, but it’s alarmingly fun (and profane, and gory) and Ms Nyong’o is a delight.”

The hottest of many hot tickets may, however, be that for Richard Stanley’s Colour Out of Space. A previous guest at Horrorthon, Stanley has failed to complete a feature since tussling with Marlon Brando on The Island of Dr Moreau in 1996. Clearly a man of some determination, he returns to the fray with a take on an alien infestation tale by HP Lovecraft.

To the relief of Stanley loyalists, the film was a critical smash at the Toronto International Film Festival last month. Nick Cage stars as a part-time farmer whose plants turn funny after a foreign object lands in the front garden. Sight & Sound noted that Stanley added “wildcards of milking alpacas, off-the-grid eccentricity and Cage ever so gradually bringing the crazy, all played to expose the cracks in an all-American family structure”. Essential viewing.

That film screened in the Midnight Movie section at Toronto. Won-Tae Lee’s The Gangster, The Cop, The Devil, a South Korean tale of serial killers and wild alterations, played to acclaim in the equivalent strand at Cannes earlier this year. Jessica Kiang at Variety was a great fan of the film’s star Don Lee. “As much fun as it is to watch Lee beat people up and strut around in shiny pinstripe suits, it’s just as much of a pleasure to watch him think it all through,” she wrote.

Horror boffins can suck up a swathe of fascinating documentaries. Scream, Queen! My Nightmare on Elm Street has more to do with A Nightmare on Elm Street 2: Freddy’s Revenge than the original film in that influential series. Why? Mark Patton, Elm Street 2’s leading man, argues that the film became a part of the LGBT film canon and made him the first male “scream queen”. Interesting stuff.

Fans of British horror from the swinging era will not want to miss Dima Ballin’s The Magnificent Obsession of Michael Reeves. Reeves, a charming ex-public school boy, made two of the 1960s most interesting horrors – The Sorcerers and Witchfinder General – before dying young from an accidental overdose. Both films have prospered with critics in the intervening decades and are now seen as models of economic unease. Witchfinder General, in particular forms, with The Wicker Man and Blood on Satan’s Claw, an unholy Trinity of British folk horror.

There’s a great deal more where that came from. Helen Hunt appears in the unsettling I See You. Travis Stevens’s Girl on the Third Floor, a horror based around the renovation of an old house, went down a storm at the South by Southwest Festival in Austin. Antrum: The Deadliest Film Ever Made will struggle to live up to its title.

And there will be plenty of Irish interest in features such as Paddy Murphy’s The Perished. Ant Timpson’s Come to Daddy, shot by Irish-born cinematographer Daniel Katz, closes the event after the premiere of Zoe Kavanagh’s short Meat Cute. That smartly titled flick oozed from the keyboard of this newspaper’s Tara Brady.