Sing Street and 1980s: If you remember them, you were here

‘Sing Street’ recreates 1980s Dublin. What else was going on at the time? 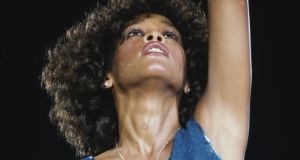 The comedian Robin Williams said that people who remembered the 1960s weren’t really there. If you remember the 1980s, on the other hand, you probably were there – but were unemployed and therefore too poor to buy any drugs and forget about anything. Alternatively, you weren’t there (or you weren’t here) because you’d had to ship out to England.

John Carney’s new movie, Sing Street, is set at Synge Street school, in Dublin, in 1985. For the boys of Synge Street, which the closing credits point out is now a pretty cool school, thank you very much, 1985 was a year of hard words, hard handling by the Christian Brothers and not-so-hard haircuts.

Life was tough in Dublin’s single-sex, don’t-pay-as-you-go classrooms, so how was 1985 for you? Or for your mother or father?

It was a good year for Duran Duran, who had made it out of Birmingham and were cruising the Caribbean on a luxury yacht with a girl called Rio. That’s how the movie tells it, anyway. Some of us may recall that video from 1982. But what’s another year?

The Clash did not fight the law in 1985, either, when taking a flight to London on your emigration journey was unthinkable.

But, hey ho, JM Synge is Synge Street’s namesake and is buried nearby, so a little poetic licence is allowed.

Nineteen eighty-five was a good year for Norwegian synthpop, though, and a-ha were taking on the world. Everybody’s hair was taking on the world, too, thanks to a ferocious amount of backcombing. Make-up was big – and not just for girls. Guyliner was in; girls made do with bubble perms and being the love interest.

It was a mixed-up decade, but, as Carney’s movie underlines, the 1980s did reveal one truth: “No woman can truly love a man who listens to Phil Collins. ”

The hunger strikes of 1980 and 1981 were the culmination of protests by Irish republican prisoners in Northern Ireland. The strike of 1980 ended after 53 days. All involved survived. The 1981 hunger strike resulted in the deaths of 10 prisoners, including Bobby Sands.

On St Valentine’s Day the Irish Family Planning Association appealed its District Court conviction for the illegal sale of condoms at Virgin Megastore, on Aston Quay in Dublin. This was rejected and the fine increased. Richard Branson, Virgin’s chief executive, testified on behalf of the association. U2 paid the fine.

A womb with a view

The eighth amendment of the Constitution was passed by two votes to one in a referendum in September 1983. It altered article 40.3.3 to give the foetus the same right to life as the woman carrying it.

In Sing Street the lead character’s feuding parents cannot divorce. “So true, funny how it seems,” as Spandau Ballet might have sung at the time. In 1986 a referendum that might have removed the prohibition on divorce from the Constitution was rejected by almost two to one. The ban on divorce was eventually lifted in 1996.

Wearing the green down in Ballyporeen

Ronald and Nancy Reagan visited Ireland in 1984. The US president lifted a pint of the black stuff. He saved his “tear down the wall” challenge for Berlin rather than Belfast.

In 1985 Barry McGuigan became world featherweight boxing champion. We were all chuffed, but not as chuffed as his manager, Barney Eastwood, who, as well as getting thanked in the ring, inspired the comedian Dermot Morgan to write a hit comedy song, Thank You Very Much Mr Eastwood.

Cycling hit the big time. Stephen Roche became a national hero in 1987 when he won the Tour de France, and Seán Kelly became one of the most successful road racers of his generation. Luckily, Lycra takes longer to catch on. John Treacy won silver in the marathon at the Los Angeles Olympics, in 1984. Eamonn Coghlan set the world indoor 2000m record in 1987. It stood until 1998, which is longer than most of us.

Who put the ball in the English net?

Two words: Ray. And Houghton. On June 12th, 1988, the Ireland soccer team played in an international competition for the first time. Ray Houghton scored the only goal in their first game at the European Championships, in Stuttgart. Did we mention it was against England? Legend.

Not technically a sport, but the Eurovision Song Contest was the gift that kept on giving during the 1980s. White-suited troubadour Johnny Logan won, first, with What’s Another Year, in The Hague in 1980, and then with Hold Me Now, in Brussels in 1987.

That year the Irish public bought enough records to push the following to the top of the charts: I Know Him So Well, by Elaine Page and Barbara Dickson; We Are the World, by USA for Africa; The Unforgettable Fire, by U2; The Power of Love, by Jennifer Rush; and A Good Heart, by Feargal Sharkey. Thank You Very Much Mr Eastwood rounded off the year.

Here’s what you could have had: People Are People, by Depeche Mode; Relax, by Frankie Goes to Hollywood; Saving All My Love for You, by Whitney Houston; Fresh, by Kool & the Gang; Crazy for You, by Madonna; Raspberry Beret, by Prince ; Smooth Operator, by Sade; Everybody Wants to Rule the World, by Tears for Fears; and Careless Whisper, by George Michael.

Grab yourself a Chilly Willy and enjoy.