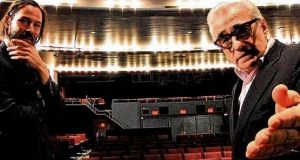 Chris Kenneally’s study of the drift from film to digital cinema breaks no new documentary ground. Keanu Reeves (for it is he) clutches his sheet of typewritten notes and leans thoughtfully forward in his chair. Various professionals celebrate the new technology, bemoan vanishing traditions and speculate about the future. This is route-one stuff.

No serious film enthusiast will, however, want to miss Side by Side. Perhaps Kenneally sent his famous interviewer (and co-producer) out to drum up the talent. It’s certainly a remarkably stellar line-up.

Directors such as James Cameron, Steven Soderbergh, David Lynch and David Fincher join equally distinguished cinematographers to talk us through the end of film and the near-universal embrace of its electronic alternative. Only Michael Mann could be described as conspicuously absent. That director’s films form a key part in the story, but he has decided to remain somewhere other than here.

Side by Side can’t quite decide if it’s for buffs or passing trade. Few casual viewers would willingly give themselves up to a discussion on the role of the digital intermediate colourist in contemporary cinema.But it still feels the need to explain what we mean by (my inverted commas) “a cinematographer”.

These are minor caveats. Side by Side encourages its participants to tell an interesting story with much wit and gusto. Joel Schumacher camply complains about actors checking their haircuts in the new, swish monitors. Cinematographer Anthony Dod Mantle explain sthe revolutionary innovations that drove Dogme 95. Older directors such as Martin Scorsese talk nostalgically about the business of handling film, but admit that the new methods are unstoppable.

Though there is much geeky slavering over technology – the talk about racy cameras has a faint Top Gear edge to it – most viewers will find it hard to watch without feeling that something vital and romantic has been lost.