Sid and Nancy review: Sex, drugs and a Vicious circle

Made just seven years after the couple died, Sid and Nancy emerged at a moment when punk was still fresh in the collective consciousness 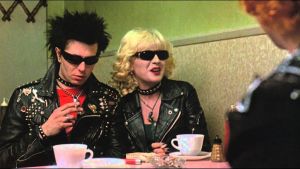 Made just seven years after the star-crossed couple of the title had died, Sid and Nancy emerged at a moment when punk was still fresh in the collective consciousness. Its proximity to the history it depicts should not be understood as veracity: the famous taxi scene at the end of the movie demonstrates that writer-director Alex Cox was happy to fictionalise and daydream around the facts. John Lydon, perhaps predictably, was outraged, claiming that “None [of the movie] bore any sense of reality”. He told Cox he should be shot and was particularly annoyed by the film’s depiction of drug use.

In Lydon’s autobiography, Rotten: No Irish, No Blacks, No Dogs, he writes: “I honestly believe that it celebrates heroin addiction.”

Loath as we are to disagree with Lydon, looking at Sid and Nancy now, some 30 years later, it’s impossible to think of it as glorification. There is nothing admirable or romantic in this portrait of addled, guileless Sid Vicious (Gary Oldman), and his junkie-groupie heroine Nancy Spungen (Chloe Webb), though we do occasionally pity them in their strung-out hell. These folks aren’t Forever Young; they’re merely youthful corpses.

Unpopular even within his own group – Sex Pistols drummer Paul Cook (Perry Benson) freezes in horrified disbelief when Sid suggests “But we’re the rhythm section” – the doomed bass guitarist finds an even more despised soul mate in Nancy, an American heroin addict who has lately arrived in London with the express purpose of bedding punk rock’s most famous combo.

Cox’s dramatisation cuts between the last days of Sid and Nancy – culminating in Nancy’s messy, hazy death in a squalid New York hotel room – and the heyday of the punk scene. The film does rather better when it’s holed up between fixes on the other side of the Atlantic, although, by then, neither of the main characters can be sure where they are: “I hate this fucking life,” Nancy whines. “Things’ll be much better when we get to America, I promise,” Sid explains. “We are in America,” Nancy whines again.

Whining is a major component of Chloe Webb’s performance. In a noisy film characterised by shouting, swearing and snarling, her pointedly unmusical vocal – not unlike a Lucille Ball w’ah without a comic punchline – is the sound that recalls Bride of Frankenstein star Ernest Theiger’s recollection of the Great War: “Oh, my dear, the noise! And the people!”

Made at a time when British independent films hardly ever looked like The Theory of Everything or The King’s Speech, the great DOP Roger Deakins works hard to make cramped, dank interiors look cinematic. Cox’s humour, meanwhile, compensates for the grim subject matter.