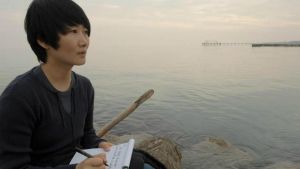 When you hear that Shun Li and the Poet concerns the experiences of a Chinese immigrant in contemporary Italy, you will almost certainly prepare yourself for a litany of atrocities. Relax. Andrea Segre’s elegant film does dally with quiet tragedies and small cruelties, but nobody gets raped, decapitated or sold into sex slavery. Rather, it’s a touching fable of the old school.

François Couturier, the gifted French jazz composer, layers the piece with melodic piano tinkles and plaintiff surges on the accordion. Cinematographer Luca Bigazzi, who has done such good work with Paolo Sorrentino, paints the Adriatic seascapes in soothing watercolours. You would have to be a very mean person indeed to dislike the film.

Zhao Tao, frequent collaborator with Jia Zhangke, plays Shun Li, a young Chinese woman working long hours in an Italian clothing factory. In the opening scene, her boss tells her that she must move to a fishing port near Venice and serve in a dockside cafe. Desperate to pay her debts, she accepts and finds herself adrift in a community apparently conceived by a less surreally minded Aki Kaurismaki. Gentle old men gather in the afternoon to drink laced coffee and discus old campaigns. A useless young hoodlum argues with his extravagantly hair-sprayed romantic partner.

Eventually, Shun Li makes friends with an elderly Yugoslavian fisherman named Bepi (the reliably brilliant Rade Serbedzija). They take trips out to his fishing shack. He reads her his rough poetry. She discusses her family. But the relationship, never exactly romantic, displeases both the locals and Li’s Chinese masters.

As the film drifts towards a sad but satisfactory conclusion, it occasionally flirts with mawkishness. But Segre, hitherto known for his documentaries, always pulls back before the slide is complete. We are left with a largely sincere study of loneliness and its consolations.

Unlike so many films on this subject, Shun Li and the Poet actually believes in the inherent decency of strangers. Don’t hold that against it.