Review: Pierre Deladonchamps in a story of pursuing love against a backdrop of ill health 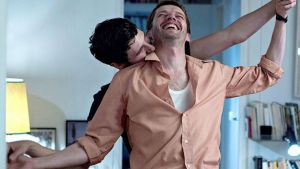 Against worsening health, the characters of Sorry Angel live by the original French title of the film: Give Pleasure, Love and Run Fast

In early 1990s Paris, Jacques (Stranger by the Lake’s Pierre Deladonchamps), is a well-regarded HIV-positive writer who lives, on alternate nights, with his young son.

His domestic arrangements are complicated. Mathieu (Vincent LaCoste), a helpful middle-aged upstairs neighbour who may have feelings for Jacques, assists with the boy and just about everything else.

Jacques has an on-again, off-again lover, Pierre (Clément Métayer), and is tending to another ex-lover (Thomas Gonzalez) who is dying from Aids. It’s hardly the time to embark on a passionate affair, and yet, when Jacques meets a passionate young 20-something Breton named Arthur (Vincent Lacoste), that’s precisely what happens.

Flashy, stylised introductory credits that could easily have ushered in the director’s Love Songs, a rapturous 2007 love letter to The Umbrellas of Cherbourg, give way to a novelistic film populated with complex characters. The men form an unlikely community but one that couldn’t be less like the exuberant cross-section of Robin Campillo’s contemporaneous and similarly-themed BPM. Indeed, when Arthur goes to an ACT UP meeting, it’s compared to visiting the Catacombs: you know, for tourists.

Jacques’ condition can be a source of black humour – “At least with Aids you can eat what you want” – but it is never treated like a tragedy.

Honoré, who wrote the script, composes long conversations of a kind that can only be found in French cinema. There are cultural exchanges, including a story about Isherwood and Auden. There’s a pilgrimage to François Truffaut’s gravesite. There’s an interesting generational divide between Arthur and his older friends when it comes to sex and sexuality.

The film is mostly set at twilight or later, leaving DOP Rémy Chevrin to create the bluest picture since Derek Jarman’s final work. The aesthetic reminds one that this is a dying young movie when everything else is working towards a strangely low-key and life-affirming dénouement.

Against worsening health, Jacques and the others quietly live according to the original French title: Give Pleasure, Love and Run Fast.