Avengers: Endgame spends too long wallowing in its own pomposity

Review: The best superhero films nod at their silliness. This one’s short on fun 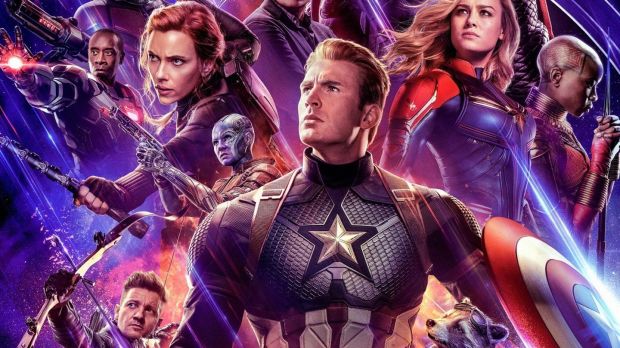 Avengers: Endgame: ‘You’d think they would, by now, have learnt the message and left behind the useless Hawkeye’

Earlier this year, the increasingly intemperate Bill Maher turned his attention towards the current ubiquity of superhero culture. “Every superhero movie is the same thing — a person who doesn’t have powers, gets them, has to figure out how they work, and then has to find a glowy thing,” he said.

All the main characters in the latest — and final, for now — Avengers film have got past the stage of discovering powers. Indeed, half of them seem to be dead.

But other established patterns remain in place. It’s just the scale that has changed.

This time round, the members of the superhero team need to find all of six glowy things — the jewels in Thanos’s oven mitt — and, after travelling through time, bring around 50 per cent of the universe’s population back to life.

That’s going to take a while. Avengers: Endgame is the same length as Andrei Tarkovsky’s Andrei Rublev, and that Russian director didn’t expect you to sit through the end credits in the hope of seeing Nick Fury. Fair enough. The assembly line has been churning out these vehicles since 2008, and even the unconvinced must admit that they are masterpieces in the art of logistics.

The script ensures that everybody gets a crack at the functional dialogue. Following a feisty prologue in which Something Important happens, that chat is much taken up with processing grief (don’t make me tell you what happened in the last episode).

Thor (Chris Hemsworth) has let himself go in Scandinavia. Bruce Banner (Mark Ruffalo) has thrown himself into work and made at least two startling discoveries. Tony Stark (Robert Downey Jr) has settled for domestic bliss with Mrs Stark.

When the time travel scheme emerges, we move about the world gathering the team for “one last job”. You’d think they would, by now, have learnt the message and left the useless Hawkeye (Jeremy Renner, I guess) — sulking in Tokyo — but they seem to still believe that every super-team needs a bow and arrow.

Getting back to logistics, the plot could hardly be better structured for the exploitation of audience nostalgia. When the second act finally gets cracking, we are taken back to incidents from various Marvel films, beginning with Marvel Avengers Assemble from 2012.

Many will remember the happy life experiences they had either side of Dr Strange or Guardians of the Galaxy. My friend Dennis said these passages served only to remind him how much precious time he’d squandered watching these ear-splitting money farms. But I wouldn’t say that even if I believed such a mean-spirited thing.

The surging music and the sniffling from various super-people leads the disinterested observer to conclude that much here is moving for those prepared to be moved. The threats to life are, however, undermined by the conceit established in the previous film. We know that Spider-Man, Black Panther and Dr Strange aren’t really dead. The first of those heroes heads up a film in just three months, for Pete’s sake. The certain knowledge that death is not forever defangs much of the peril in the later stages. If anything is possible then nothing really matters. (We’ve already been through that unconvincing grief for Superman in another universe.)

There is fun to be had. These pictures always work best when acknowledging their own silliness. The best joke in Endgame sees Ant Man desperately failing to interest children, who’ve just had their photo taken with Hulk, in a selfie with the least famous of the Avengers. Thor gets to revisit some of the irreverent humour that so enlivened the excellent Thor: Ragnarok.

More of that self-deprecation would be welcome, but Endgame spends too much time wallowing in its own pompous mythology. The brief bringing together of several female heroes (heroines?) into a Girl Power posse would be gag-inducing even if it weren’t so perfunctory. The passing of batons has the solemnity of a sacred rite.

What other reaction would you expect from an apostate? If you buy the theology you will have no objection to such an elaborately staged religious service. This is the full high-church mass: incense, hymns, sung responses, celebrants in embroidered vestments. We wish them well with the upcoming introduction of a New Testament.