Sergio: Unsubtle but efficient biopic of an inspirational UN leader

Review: The screenplay works hard to cram a long career into a fresh, well-meaning whole 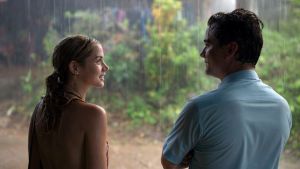 There’s a short season to be compiled of feature dramas adapted from the same directors’ documentaries. Werner Herzog’s Rescue Dawn, a variation on the great man’s Little Dieter Needs to Fly, is among the better adventures in this peculiar genre. Greg Barker’s take on a distinguished diplomat – a Netflix premiere – could hardly be more different to that deranged jungle adventure. It is reverent. It is measured. It is a little dull. But it gets the information across in efficient fashion. There are worse ways of checking off the yawning hours.

Barker has worked his 2009 film on Sérgio Vieira de Mello, an inspirational UN official killed in Iraq 17 years ago, into something like a “faith drama” without the faith (unless you count unquestioning devotion to the United Nations). It has about it the same virtuous cleanliness you expect from films that end with the protagonist finding God after recovering miraculously from a mining accident.

That’s not quite fair. The screenplay works hard at cramming a long career into an admittedly sizeable package. We begin with Sérgio (in the form of Wagner Moura) arriving at the Canal Hotel in Iraq. Some clunky dialogue prepares us for a movie-movie experience of the shiniest hue. “This is Baghdad, not San Tropez,” Gil (the reliably excellent Brían F O’Byrne), Vieira de Mello’s number two, explains to him and to us. Some time later an explosion buries the hero and, as rescue workers claw from above, he thinks his way through his eventful career: negotiations in East Timor, the aftermath of the Iraq war, intimations of an endless insurrection.

The movie is not subtle in its arguments, but its commitment to its own values is commendable. It cannot be entirely a coincidence that Bradley Whitford, best known as one of the circling saints in the ludicrously sunny The West Wing, has been cast as an unambiguously malign version of Paul Bremer. In an early scene we hear Vieira de Mello talking America’s man in Iraq through the perils of detaining prisoners in Saddam Hussein’s maximum-security prison. We know that building as Abu Ghraib. Vieira de Mello is reasonable. Bremer rumbles like a faulty immersion heater.

Later, in a more distant flashback to southeast Asia, we find him encountering the Khmer Rouge leader Ieng Sary. Both men were together at the Sorbonne during the disturbances of the 1960s. Ieng wonders what happened to the old radical. “I don’t believe in demanding the impossible any more,” Sérgio replies. At such moments it becomes clear that Barker is arguing for the sort of humane centrism that Whitford’s character touted weekly on a millennial TV show. What else should we expect from the director of The Final Year, a hagiographic documentary on President Obama’s foreign policy?

The handsome, charming Moura, who played Pablo Escobar in Narcos, is, on the evidence of archival footage here, almost as handsome and charming as the real Vieira de Mello. He is never wrong, but he is never arrogant about his infallibility. Shot with a steady, unfussy camera by Adrian Teijido, the drama is easier on the eye than something so laden with tragedy should be. Indeed, they don’t often gloss these things up so shamelessly these days. The romance between Vieira de Mello and the younger Carolina (an increasingly unavoidable Ana de Armas) – complete with icky, sheet-clutching sex scene – would not be out of place in a biopic from the Eisenhower era: top genius Rock Hudson finds time for lovely colleague Kim Novak among the test tubes.

Yet they made those things for a reason. The picture is absurdly compromised, but not so much that you want to look away. It’s fresh, well-meaning and swollen with historical detail. That will do to be going on with.

On Netflix from April 17th