Rings review: you might die of boredom within seven minutes 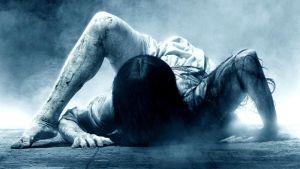 Beware of any film that contains the phrase “primitive cultures believe that…”.

What inevitably follows are words to the effect of “cars transform into robots/werewolves fear silver bullets/Jennifer Aniston will find love” or some other justification for the movie’s threadbare premise. Primitive cultures believe that this film was always going to happen.

Fourteen years (no really) after the US version of Hideo Nakata’s Ringu, we get a digital take on the haunted videotape trope. There are intriguing possibilities in here. Whereas the old technology was difficult to copy and distribute, an online curse can be passed about the world in the click of a key. What will these talented young film-makers do with this exciting premise?

Primitive cultures believe that worthwhile disinterments of long-dead horror franchises are rarer than Palme d’Or-winning videogame adaptations. Sadly, Rings does not break the pattern. Chief among the film’s numerous flaws is its lack of interest in exploiting the current technology.

A misused Johnny Galecki plays an academic – he of the “primitive cultures” – who unearths the deadly tape in a junk shop. Some time later, after digitising the information, he irresponsibly involves his students in a savage circle of annihilation. As you will recall, anybody who watches the film is doomed to die within seven days.

F Javier Gutiérrez’s murky film – apparently filmed in a bath of consommé – makes sure to get the series’ greatest hit in good and early. You won’t need to be told that a ghostly figure climbs from a screen and advances on one of the victims. For the succeeding hour it settles down into an enormously boring detective story that requires the bland young leads to drive pointlessly from spooky guest house to wind-blasted cemetery.

“I saw Evelyn on the drive in,” the female lead says, pointing to an old photograph. “No, she went missing 30 years ago,” somebody replies. Did a professional writer actually type these words onto a screen?

The cursed video now looks like an experimental film made by somebody who has watched more Marilyn Manson videos than Stan Brackhage pieces. It does, however, provide clues to a mystery that really isn’t worth solving. Primitive cultures believe it’s sometimes best to leave sleeping franchises undisturbed.

‘He’s so strapping and virile’: Patrick Stewart at 80, by Shatner, McKellen, Grammer and more
8