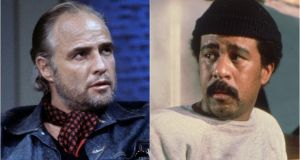 The widow of Richard Pryor has confirmed a claim by music producer Quincy Jones that the late comedian and Marlon Brando were lovers in the 1970s.

Jones first made the allegation in a wide-ranging interview with New York Magazine while talking about Brando’s sexual habits. “He’d f**k anything. Anything! He’d f**k a mailbox. James Baldwin. Richard Pryor. Marvin Gaye, ” the producer said.

Pryor’s widow Jennifer Lee Pryor, who was married to the comedian twice, told TMZ the openly bisexual comedian would be “cracking up” about his relationship with Brando being made public. “It was the 1970s! Drugs were still good, especially quaaludes. If you did enough cocaine, you’d f**k a radiator and send it flowers in the morning,” she said.

Lee Pryor added Richard Pryor had written extensively about his sexual relationships in his diaries, which she says will be published later this year. The comedian, who died in 2005, was married seven times to five different women. He and Lee Pryor divorced after a year together in 1982, but remarried in 2001 and remained together until his death.

Jones’s interview with New York Magazine has attracted much attention online due to the range of colourful answers given by the producer.

He referred to Ireland as a “racist” country - a claim he made previously in a recent interview with GQ magazine. Jones also said  U2 singer Bono had named a son after him and that he stays in Bono’s “castle” when he visits Dublin.

“When I go to Dublin, Bono makes me stay at his castle because Ireland is so racist. Bono’s my brother, man. He named his son after me.”

When asked if he thought U2 were still making good music, Jones shook his head.

“I love Bono with all my heart, but there’s too much pressure on the band. He’s doing good work all over the world. Working with him and Bob Geldof on debt relief was one of the greatest things I ever did. It’s up there with “We Are the World.”

Jones also described the Beatles as “the worst musicians in the world” and claimed Michael Jackson stole “a lot of stuff” from other musicians, as well as claiming to know the identity of the man who killed John F Kennedy. Jones added he briefly dated Donald Trump’s daughter Ivanka, and described the current US president as a “f**king idiot”. – Guardian Service