Black Panther: This film is revolutionary. Just not that good

Review: It features a black superhero, but the CGI is suffocating and the plot is weak

New superhero film 'Black Panther' is based on the Marvel Comics character of the same name and stars Chadwick Boseman in the lead role. 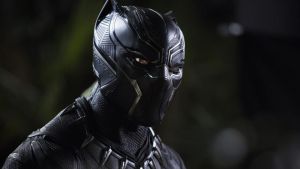 That’s right. Black Panther is not just another superhero film. It is the first flick in the Marvel Cinematic Universe to feature a black protagonist. Ryan Coogler, who did such impeccable work on Creed, is the first African-American film-maker to get his hands on a Marvel megaphone.

Nobody’s messing. The team take the opportunity to immerse us in a properly Afro-centric universe, and, if advance bookings are any measure, their backers will be repaid many times over.

All that noted and celebrated, it remains a shame the film isn’t a little better. The excess of CGI is suffocating. The surface plot is impossible to care about. Image battles on Instagram engage more subtly with the politics of liberation.

Oh, and Black Panther doesn’t get enough opportunity to actually be the Black Panther. Coogler has as much right to direct a so-so children’s film as the next chap – after all, Kenneth Branagh directed Thor – but a little more roughage would have been nice.

We begin with a prologue in the Bay Area that gestures towards a later dispute between two sons of the African kingdom known as Wakanda (somewhere in the vicinity of Uganda, apparently). In the series’ version of the present day, the brave T’Challa (the excellent Chadwick Boseman), declared king after his father’s death, is preparing for a ritual that requires him to accept challenges before formally ascending the throne.

There is some violent ballyhoo with Ulysses Klaue (Andy Serkis), an evil South African arms smuggler, but this is mere overture to T’Challa’s showdown with the more radical Erik Stevens (Michael B Jordan). We know T’Challa as the Black Panther. We come to know Erik as Killmonger.

The action sequences meet, but do not exceed, the industry standard. A car chase through Busan begins decently before descending into a computer-graphical kaleidoscope that will baffle, rather than dazzle, most waking brains. A final, massed fight in a field veers from chaos to unintended comedy to Daniel Kaluuya riding a rhinoceros. It’s all carried off with enough dash to stave off boredom. That’s something.

Elsewhere, Black Panther breaks its supposed new ground with limited success. The notion of an African city that has evolved without colonial dominance is an attractive one, but what insight can be gleaned from an imaginary metropolis whose every advance depends on a mysterious glowing mineral?

It’s all about the baloneyum. Sorry, I read that wrong. It’s all about the vibranium. It powers the trains. It allows the skyscrapers to rise. “This isn’t magic. It’s science,” someone says when introducing an invisible car (or something). Of course it’s magic.

The excessively purple Wakanda is no less fantastic than Asgard, and, like all utopias in all fiction, it is a lot more boring than most fog-soaked, dystopian complements.

The design team bring together an array of cultural references to deliver a look that, though fresh and attractive, feels no more authentic than the Afro-centric sleeves of 1970s LPs such as Miles Davis’s Bitches Brew.

More worrying is the anaemic political conflict that divides Black Panther and Killmonger. We have already been here. The dispute between Charles Francis Xavier and Magneto in X-Men was seen as a metaphor for that between, respectively, Martin Luther King and Malcolm X.

We get closer to the source here with T’Challa initially arguing for glacial change and Killmonger putting forward the more radical option. To be fair, the writers surely expect their audience to be divided – Killmonger is a Public Enemy fan, after all – but the feebleness of T’Challa’s case strips the battle of any urgency. (We could laugh all this off if Black Panther didn’t take its own imagined universe so seriously.)

Why are we listening to the leader of a hereditary monarchy, anyway? Get elected, mate. Then get back to me.

In cinemas on Tuesday February 13