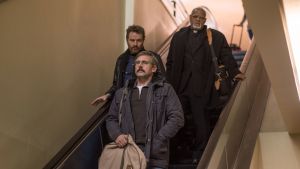 Editor's Note: This review was published in advance of the scheduled release date. However, the film is now not being screened in any cinemas in the Republic of Ireland. It is available on Amazon Prime from February 9th.

This is a belated spiritual sequel to Hal Ashby’s comedy-drama The Last Detail, which starred a foul-mouthed Jack Nicholson and Otis Young as “lifer” Marines escorting a convicted prisoner (Randy Quaid) to military prison.

As with the 1973 film, Last Flag Flying is based on a book by Darryl Ponicsan and concerns an unorthodox military escort.

It’s 2003, and Doc (Steve Carell), a widowed Navy corpsman and Vietnam veteran, has learned that his only son has been killed in an early skirmish in Iraq. He tracks down a pair of old Marine Corps buddies – city bartender Sal (Bryan Cranston) and country preacher Mueller (Laurence Fishburne) – and asks them to assist with the funeral. He hasn’t seen either of them since a dishonourable discharge decades ago. Their journey is alternately sombre and loud: the abrasive Sal seldom shuts up, Mueller flits between bemusement and annoyance, and Doc is quiet and stoical.

Their shifting, uncertain chemistry settles when they reach Dover Air Base, where a comrade, Washington (J Quinton Johnson) hovers near the coffin of the dead Marine. On Sal’s insistence, the young man contradicts the official heroic account given by his officious superior Col Wilits (Yul Vazquez). Thus, against the colonel’s advice, Doc and the others attempt to bring the body to New Hampshire, to bury the young soldier near his mother. Along the way, there are scrapes with trucks, trains and the Department of Homeland Security.

Richard Linklater’s most theatrical film since Tape retains the novel’s basic narrative. It extricates itself from Ashby’s film by changing the characters’ names and backstories and yet embraces the earlier film by including a scene among the characters’ reminisces. Cranston makes for an effective Jack Nicholson. Fishburne visibly juggles godliness with a sailor’s mouth. Carell is affectingly meek. The raucousness of the original has given way to glib quips and jadedness. These Vietnam veterans don’t expect honesty from their government or their armed forces. Conversely, Sal’s hardline adherence to “the truth” – a sensibility that encourages Doc to lift the lid on the coffin – can be as painful as the lie. But, as Last Flag Flying concludes, at least there’s a camaraderie in knowing that your losses were for nothing.

The Music Quiz: Which U2 video features an appearance of Boyzone?
6