With a background in avant garde theatre, the actress broke big with ‘The Mummy’. Now she plays historian Deborah Lipstadt, who took on Holocaust denier David Irving 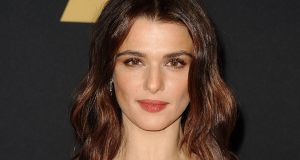 Rachel Weisz: “I was just not part of the ‘dressing for red carpet’ scene.” Photograph: Jason LaVeris/FilmMagic 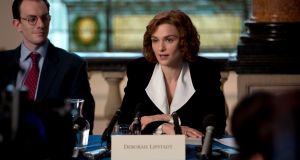 One might reasonably deduce that Rachel Weisz had a personal connection with the material in Mick Jackson’s Denial. Based on a script by David Hare, the picture focuses on the libel action taken by David Irving, the English Holocaust denier, against Penguin Books and the historian Deborah Lipstadt in 2000. Both Weisz’s parents fled Europe before the war to escape the Nazis.

“There wasn’t really,” she says. “The Holocaust denial thing didn’t really affect me until the internet age. The parallels with Trump are huge. David Hare was massively aware of that. He was inspired by that before he even knew he would become president.”

Weisz is a famously smart piece of work. She learnt how to debate at the hearthside. She did a bit of modelling as a teenager. She read English literature at Trinity Hall, Cambridge, where she formed an avant garde theatre company. The larger world recognised her talent in 2005 when she won an Oscar for The Constant Gardener.

Did that early period of modelling prepare her for what was to come?

“No. Not really,” she says. “I was just a teenager getting dressed up for photographs. There was no fame attached. It’s actually a bit detrimental for acting in film. Doing that, you have to forget the camera is there. Well, I do anyway.”

Weisz twice decided not to go to drama college. The option was there when she left school. It loomed again when she left university.

“There was a choice,” she says. “I was going to go to drama school afterwards. I had a place at Central School of Speech and Drama. Then I got a job and didn’t go. I did want to. I had been thinking about drama school before. But I had been brainwashed to go to college.”

Weisz balanced her time at Cambridge very judiciously. She worked her way towards 2.1 while performing with her theatre company Cambridge Talking Tongues. In 1991, she and her colleagues won a Guardian student drama award for an improvised piece. At this stage, a career revivifying Antonin Artaud in dusty basements seemed a likely option. But she had the looks and presence for the mainstream.

“Yes, I started getting jobs on TV and I was attempting naturalism and that was hard because what I had done was European-style, absurdist physical theatre. I got a job in a Scottish TV series called The Advocate. I played a student and that was almost impossible for me – even though that was all I’d ever been.”

What would she have done if she was forced to change direction?

“I thought about making documentaries. I also thought of doing a law conversion and becoming a lawyer. But I don’t think I have the right personality for that.”

No such diversion proved necessary. A role on Inspector Morse led on to film work. By the turn of the century, Rachel Weisz was a force to be reckoned with. She was superb in Michael Winterbottom’s I Want You. She was charismatic in István Szabó’s Sunshine. Like Glenda Jackson or Vanessa Redgrave before her, Weisz combined pizzazz with an inner seriousness.

What happened next was a surprise. Her comic turn as a goofy boffin in The Mummy made her a proper mainstream movie star.

“It was amazing,” she laughs. “Nobody had any idea that people would be still talking about it nearly two decades later. I had watched a lot of adventure movies with my mum: Zorro and that. I read it and thought: ‘This is a doddle; I know who this person is.’ I didn’t even go to the premiere. I was just not part of the ‘dressing for red carpet’ scene.”

She seemed to learn that knack pretty quickly. In 2005, her performance in The Constant Gardener propelled her to an Oscar for best supporting actress. There were, as ever, a great many red carpets to be traversed and a great many interviews to be endured. I don’t imagine anything can prepare an actor for those glamorous ordeals.

“I was pregnant,” she remembers. “I was seven and a half months pregnant. It was extraordinary to be having your first child and to become part of that conversation. I never thought that would become part of my life. It was very surprising and obviously incredibly exciting in so many levels. I had never even attended the ceremony before.”

Weisz was married to the director Darren Aronofsky from 2001 until 2010. Shortly after the relationship dissolved, she married Daniel Craig. They have done a good job of keeping their private life out of the tabloids. The couple live in downtown New York. They have appeared together on stage in Harold Pinter’s Betrayal. They otherwise remain quiet.

Two years ago, she shot The Lobster in attractive parts of Kerry. We will next see her in an adaptation of Daphne du Maurier’s reliable melodrama My Cousin Rachel (how appropriate). A neat artistic balance seems to have been struck.

“We had a wonderful time in Ireland, ” she says. “I so want to go back. I want to do a big driving trip.”

That’s the right thing to say. Somebody taught her decent manners.

– Denial is out now on general release