Pierce Brosnan: charm is all he needs

He may have left the Bond persona behind years ago, but Pierce Brosnan is still one smooth operator 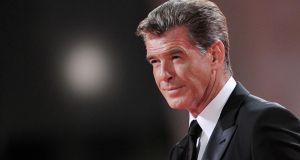 Let’s be honest. There is one adjective that describes Pierce Brosnan best. He is smooth. He is smoother than the smoothest surface sold in Smooth and Co. When he inherited the part of James Bond from Timothy Dalton, he made that fine actor seem, in retrospect, like a Welsh gorilla. That suaveness served Brosnan well while playing a variation on Tony Blair in Roman Polanski’s The Ghost . He smoothed his way delightfully (though not always tunefully) through Abba classics in Mamma Mia!

You don’t need to see him in Susanne Bier’s fine Love is All You Need to savour the Brosnan silk in action. Just listen to him talk about it.

“I did it two summers ago in Sorrento with the wonderful Susanne,” he says. “I had the time of my life. I do love this film. You get the warm embrace of a move that has heart and love.”

In the Oscar-winning Bier’s gorgeous new film, Trine Dyrholm plays a breast-cancer survivor who, while attending a wedding in Italy, becomes involved with the sleek, widowed father of the groom (not played by Timothy Dalton). Brosnan has, of course, a personal connection with the story. In 1991, Cassandra Harris, his first wife, died of Ovarian cancer, and he has campaigned tirelessly for cancer charities throughout the succeeding two decades.

“It does deal with breast cancer,” he says. “You know, no one ever goes near cancer. They don’t want to. I lost my wife to cancer. So it has that poignancy for me. Susanne had no idea of my personal circumstances when she got in touch. But it’s a man dealing with cancer and being a single father. I felt I knew it. I felt I could play it.”

And he makes a good couple with Dyrholm, hitherto best known for Danish films such as Festen and A Royal Affair .

“In each film, Trine stands front row and centre in all her beauty and magnificence,” he says in hyper-smooth mode. “She told me she had never really played this sort of character. It took an Irish ham to bring it together. Heh, heh! You probably shouldn’t print that.”

Yes, indeed. Our Pierce has always made a point of stressing that he is, well, our Pierce. Born in Drogheda, he spent the first 12 years of his life in historic Navan. He then moved to Scotland and, eventually, settled in South London with his mother, who had left home to work as a nurse when Brosnan’s dad abandoned the family. It sounds like an ideal background for an actor. As he travelled, he must have learnt a great deal about human nature.

“I would definitely say so,” he says. “Most actors are made of a different cloth. It’s not that they’re superior to the rest of society in any way. But they’re fractured in a way that goes right to the heart. They’re looking to make sense and order of the world. When I found acting it was a salvation, it was a sanctuary, it was a way of expressing myself. It was a way of putting all the mangled pieces of my psyche in order.”

Is there any of this mental fracture elsewhere in the family?

“I don’t think there was anyone else in my family like me,” he laughs. “My father was very good at sketching and drawing. I do have that knack. I was training as a commercial artist when I left school. I still paint. I still have a studio. That’s a passion and a way to relax.”

After attending the prestigious Drama Centre in London, Brosnan lived through a fairly typical period of actorly ups and downs. He appeared in the British premiere of a late Tennessee Williams play. He popped up in the well-remembered gangster classic The Long Good Friday . There were also ventures into fire-eating, experimental Irish rock musicals and any number of other oddities. How does all that help put the “mangled piece of the psyche” in order?

“Sometimes you find yourself on the streets making a movie and it’s not at all dissimilar to the years of doing street theatre,” Brosnan says. “Agitprop theatre, circus skills, fireeating, clowning skills: you carry all that with you. It’s a part of being an actor, of being a performer, of being an entertainer. It’s essential to keep the innocence and the joy of it all alive.”

Remington Steele , a strange, sneaky US detective series from the mid-1980s, significantly changed Brosnan’s life. The part was clearly a variation on James Bond and, when Roger Moore eventually shuffled away from that role, overtures were made to Brosnan’s agents. Unfortunately, he had difficulty extricating himself from the Remington Steele contract and had to bide his time until Dalton exited the franchise. He finally made his debut as 007 in 1995’s GoldenEye .

“I kind of created this world for my family when I went to America,” he now muses. “That’s where it really took off. I’ve been playing on that ever since. You hope to have more than one character that makes an impression. There aren’t too many actors that really get to do that. Daniel Day-Lewis is really the one. I’m constantly dazzled by the strength and complexity he can put in to the work.”

Brosnan clearly has complex feelings about the whole Bond experience. He has made no secret of the fact that, had Daniel Craig not been edged into the Aston Martin, he would happily have made a few more films in the series. Indeed, at one stage, he talked to Quentin Tarantino about the possibility of collaborating on a 007 film.

“I will never forget that night,” he says pulling on his anecdote hat. “We drank so many apple martinis. We could just about walk. I don’t know what he saw in it. But Quentin really liked what I did as James Bond. He really wanted to do one with me. But, you know, it’s another man’s job and another man’s day now. I have nothing but gratitude for having had Bond in my live. It gave me the opportunity to solidify as an artist and an actor. I had mighty, mighty times.”

The afterlife hasn’t been too wretched either. He had fine reviews for The Matador and Seraphim Falls . He had a colossal hit with Mamma Mia! But it has been a strange period. He has made fun of himself in pictures such as Mars Attacks! and, in that Abba musical, allowed his (let’s be polite, here) limited gifts as a singer to be exposed in full. The current Pierce Brosnan, though smoother than ever, seems more self-aware than the original incarnation.

“You know, I was so intent on being James Bond for so long and I tried so hard to be James Bond for so long,” he ponders. “It was like being the ambassador to a small country. You get older and you hold on less tightly, I suspect. I always saw myself as a character actor. And then I suddenly found I was a leading man. As a character actor you can be free. You can approach any project with a degree of abandonment. Being a leading man is so personal. It’s so tricky to get right.”

Brosnan has been married to journalist Keely Shaye Smith since 2001. They have two sons and divide their lives between sunny Malibu and even sunnier Hawaii. There are worse ways of spending a life. When he’s not being the smoothest actor in the pack, he finds time to support an entire portfolio of worthwhile charities. Still, he does still have to cope with occasional intrusions from the tabloids. Certain recent interviews for Love is all you Need have spun his quotes to suggest he was “still in love” with his first wife.

“I’m not quite sure what that means,” he says. “I did an interview in London for the film and they made a fuss about it. They suggested I was still not over my late wife and a lot of nonsense like that. I went through that period of time and I was asked questions and I spoke as honestly as possible. But the circumstances of my life have moved on.”

If Pierce Brosnan is secretly tormented, then he really is some kind of master actor. A sort of warm caramel contentment seeps through all his answers. Never has any man radiated such soothing confidence.

“As an actor, you have emotions – which I hopefully monitor and use in a performance,” he says. “But I’m happy. My wife is gardening. The kids are back at school. I have a job to go to. This new film is lovely. It’s easy to talk about such a film.”

It sounds as if he happened upon the right job all those years back.

“I just love been an actor and I’ve always been very lucky because I seem to have got away with it.”

The Guards: Inside the K – Policing in Ireland, but not as we know it
5