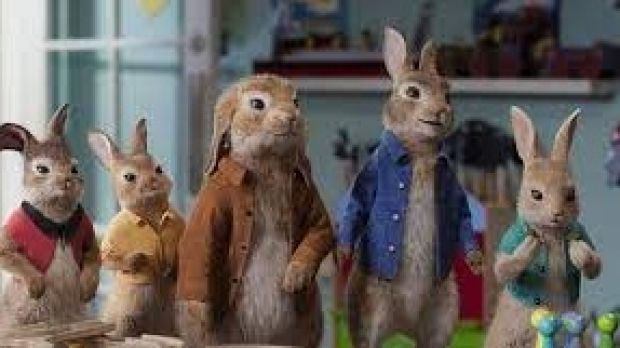 “I’d be spinning in my grave if my books were turned into some sarky hip-fest for commercial gain – probably by an American,” snorts Bea, as in Beatrix Potter, as played by Rose Byrne in the second instalment of this sarky hip-fest rendering of Potter’s Peter Rabbit.

Whether it’s the middle film from the Scream trilogy or Henry IV Part II, a good sequel requires a degree of self-reflexivity, and Peter Rabbit 2 (or Peter Rabbit 2: The Runaway, as it is styled in some territories) winks and nods endlessly at the audience. That’s Not My Name, Boulevard of Broken Dreams, and other extremely literal-minded music cues – unearthed from 1990s and noughties vaults to appeal to parents – are jeered by the title character or crooned by an autotuned squirrel.

An evil publisher (David Oyelowo) hopes to transplant Bea’s illustrated animals to the present day (just as the films have done) to place them in greater jeopardy and on ski slopes (spoiler alert). There are a few welcome japes at the expense of James Corden’s “polarising” talent: “I also imagine his voice to be quite annoying,” suggests Oyelowo’s villain.

Charles Dickens is namechecked, as the plot – which sees Peter fall in with a crowd of lovable thieves – transforms such quaint Potter creations as Jemima Puddle-Duck into desperate criminals.

Will Gluck, who presided over the disastrous 2014 adaptation of Annie and the misfiring comedies Friends with Benefits and Easy A, makes for a competent presence in the director’s chair. It’s the human stars, however, who truly shine. Domhnall Gleeson finds fun new ways to fall over. Rose Byrne delivers knowing lines about 23 books and 109 characters with enough straight-faced sincerity to wring laughs.

“I’m terrible at foreign languages; great at cartoon violence,” boasts Corden’s Peter. Smaller children should probably be warned that it’s not good form to rabbit thump a groom on his wedding day.