Paul Verhoeven on his ‘rape comedy’: ‘this is horrible and that is funny’

The seriousness of the rape should not exclude anything funny in the film, argues the Dutch director 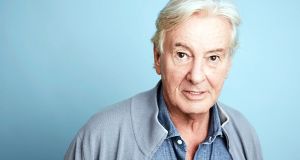 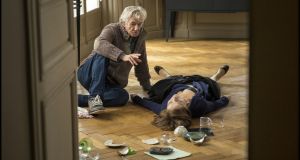 Paul Verhoeven with Isabelle Huppert on the set of ‘Elle’

The director of RoboCop, Total Recall, Basic Instinct and, now, Elle is known for violent engagements with proto-fascism and dubious explorations of sexual dysfunction. You will, however, struggle to find a more enthusiastic individual. Search for video of the Dutchman receiving his seven awards for Showgirls at the 1995 Golden Razzie Awards. Each time he bounds to the stage he is louder and more outrageous. Not everybody nominated for the “worst film” gongs turns up.

“That was a very big success,” he nearly bellows. “It went very well. I went up to the stage seven times. Worst actress. Worst script. Worst music. And it became very triumphant at the end. They were yelling and screaming and shouting. In the beginning, it looked like animosity. At the end there was no rejection of me. It was a joyous experience.”

Now 78, Verhoeven finds himself in a less ambiguously happy place. Elle, Verhoeven’s first film in French, has proved to be the most warmly reviewed of his career. The picture won Isabelle Huppert, who plays an executive coping with a recent, violent rape, her first ever Oscar nomination. True, controversy has gathered around the project. But there has been less of that than he might originally have expected.

Verhoeven’s adaptation of Philippe Djian’s novel Oh… riskily weaves humour into a story of rape and its aftermath. The last act takes us places that such films aren’t supposed to go. Reviews at Cannes, though largely positive, were couched with expectations of imminent outrage. It wasn’t really until the film opened in the US that the anger began to emerge. Yet nobody booed when it won the Golden Glove for best foreign language feature.

“There was less controversy,” he agrees. “We originally were going to make an American film. We turned the script into an English-language script. Then we found out that all these actors wouldn’t do it. They heard there might be controversy. After that many journalists have said this is going to be very controversial. It hasn’t really happened yet.”

“Mostly you get these answers through managers. So you never really know,” he snorts. “I don’t think it’s so much about the rape itself. That is obviously negative. But it’s more to do with the third act. It doesn’t become a revenge movie.”

Alas, we can go no further into this conversation without revealing what happens in the closing sections. But we can discuss the film’s startling tone. Did he get the feeling that the admission of wit into a film concerning rape stoked discomfort? It allowed a few critics to call Elle a “rape comedy”. (It’s not that.)

“I know those objections exists,” he says. “I reject the notion that the seriousness of the rape would exclude anything funny elsewhere in the film. I feel that would be dogma from a dictator. You cannot do that. Real life is full of elements that are opposite to one another.”

He’s on a roll now. Verhoeven can spit out 1,000 words on this subject without drawing breath.

“There is this and it is horrible and there is that and it’s funny,” he says. “There is no law that says you can’t juxtapose such things.”

Even those critics who objected to the film admitted that Huppert is first-rate. It is impossible to imagine anybody else managing this kaleidoscope of motivations.

“We didn’t discuss Freudian psychology,” he shrugs. “What she brought was an authenticity. You may not sympathise or understand her. But you feel all the time that that person really exists.”

“There was blood, destruction, death, ruins for six years,” he remembers. “And then there were reprisals. People being killed and being forced to walk the streets. If you see that at that age, you can’t imagine another world exists. You start to be pessimistic about the world. You see only death and destruction.”

Another stream of heavily accented vowels washes around the room.

“Maybe that is why there is violence in my movies,” he says. “The whole universe is violent. You think of all those collapsing universes.”

The son of a teacher and a milliner, Verhoeven completed a degree in maths and physics at Leiden University before going on to take classes at the Netherlands Film Academy. He had to wait until the 1970s before moving into features. The acclaimed Turkish Delight from 1973 made great use of a young Rutger Hauer. Soldier of Orange, a tale of the resistance, was a critical hit in 1979.

His American career was quite a rollercoaster. RoboCop and Basic Instinct were enormous hits. Showgirls was a disaster. The anti-fascist Starship Troopers was seen as pro-fascist. Eventually, at the beginning of the new century, he returned to the Netherlands and made the war film Black Book. Did he reject the United States or did the US reject him?

“I would say in the beginning they liked me very much,” he laughs. “RoboCop was praised all over the place. Then it got worse. On Roger Ebert, RoboCop got two thumbs up. Then Basic Instinct and Total Recall had some trouble. Showgirls and Starship Troopers had more difficulties. So it was slowly dawning on me that this might be a dead end.”

Verhoeven is just the sort of continental libertine that Hollywood intermittently employs to make its more risqué entertainments. But there was a sense that the US began to tire of his broad swipes.

“The New York Times wrote that I would never understand the United States,” he says. “I think I understood the US pretty well. Showgirls said that in Vegas, sex is just about money. That statement applies to the United States in general now. You are close to being able to buy elections.”

It is mid-October when we speak. Something sinister is happening across the Atlantic.

“Trump winning seems to me to be impossible,” he sighs. “But worse things have happened. I keep my fingers crossed that it will be Hillary.”

I grunt approval. We’re sure things will work out just fine.