Out of Here review: a picture-perfect framing of a time and a place 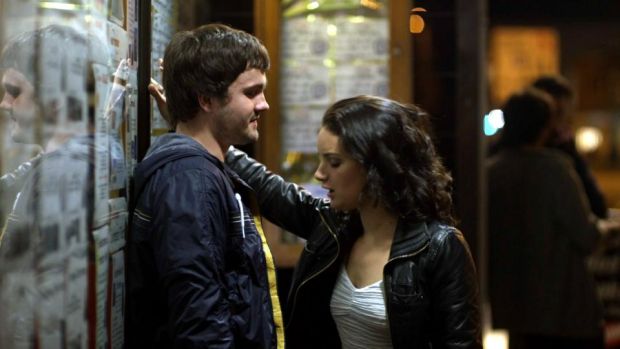 Bloom with a view: Fionn Walton in Out of Here

Film Title: Out of Here

We wouldn’t want to scupper Donal Foreman by labelling his wonderful debut feature “cool”, but, darn it, there is something unavoidably hip about Out of Here. Largely funded through crowd-sourcing, the picture follows Ciarán (Fionn Walton), a young Dubliner, recently returned from travels, as he meanders about his home city. He talks amiably enough with middle-class parents (lovely turns from Arthur Riordan and Gina Moxley). He has flirtations in a pub. There are bohemian revels with art students. Some sort of mystery surrounds our latter-day Bloom – he dropped out of college for no obvious reason – but the film never worries too much about scaring up a plot.

The Brownian motion recalls early work by Jim Jarmusch or effusions of the mumblecore movement, but the film’s stubborn sense of place helps it establish an identity all its own.

Yes, we get to see gorgeously composed shots of Dublin locations through Piers McGrail’s largely static camera: fish swimming in the shallows of Dublin Bay; O’Connell Street looking unexpectedly luminous; a slightly exotic version of the airport. It is, however, the tone of the conversation and the timbre of the humour that situates the film so precisely.

Nowhere else in the world does conversation curl and meander in quite this fashion. Staying someway back from the action, leaning towards shades of grey and blue, Foreman risks cooling the atmosphere to freezing, but the eccentric energy of the performances keeps the picture’s pulse throbbing.

Because we’ve seen films before, we half expect Ciarán to reveal some awful hidden torment. That doesn’t quite happen, but we do get an explanation as to his partial withdrawal from the world. Then the relaxed, meandering drift towards a gorgeous final shot continues.

Pay attention. This is what can happen when a talented young director is allowed to make the film he really wants to make. One of a kind. What a debut.