The Irish Times Film Show is presented by Donald Clarke and Tara Brady. This week, Damian Chazelle's 'Whiplash' and Jean-Marc Vallée's 'Wild' are on the cutting bench. Video: Niamh Guckian 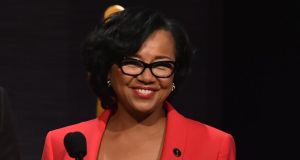 The head of the Oscars, Cheryl Boone Isaacs, has responded to controversy over the all-white acting list in this year’s Oscar nominations, saying it inspires her to speed up the push for more diversity. Photograph: Kevin Winter/Getty Images

The head of the Oscars, Cheryl Boone Isaacs, has responded to controversy over the all-white acting list in this year’s Oscar nominations, saying it inspires her to speed up the push for more diversity.

Ms Boone Isaacs, the Academy of Motion Picture Arts and Sciences’ first African-American president, spoke out about the Oscar nominations and the widespread criticism that followed.

All 20 of this year’s acting contenders are white and there are no women in the directing or writing categories. After the nominations were announced, the #OscarsSoWhite hashtag started trending on Twitter.

Ms Boone Isaacs said the academy was “committed to seeking out diversity of voice and opinion” and the outreach to women and black artists was now a major focus.

“In the last two years we’ve made greater strides than we ever have in the past towards becoming a more diverse and inclusive organisation through admitting new members and more inclusive classes of members,” she said.

“And personally, I would love to see and look forward to see a greater cultural diversity among all our nominees in all of our categories.”

She noted that each branch comes up with its own criteria for excellence and nominates its colleagues. For instance, only directors can suggest best director nominees and only actors can nominate actors. But the entire academy membership can submit suggestions for best picture.

“What is important not to lose sight of is that (civil rights drama) Selma, which is a fantastic motion picture, was nominated for best picture this year, and the best picture category is voted on by the entire membership of around 7,000 people,” she said.

Besides best picture, the film received just one additional nod, for original song, in what was widely viewed as a significant snub.

With all the accolades Selma received since its Christmas opening, some felt its failure to garner nominations for director Ava DuVernay or star David Oyelowo reflected a racial bias.

Who was Red Hugh O’Donnell? The ‘fiery’ symbol of Gaelic resistance
Real news has value SUBSCRIBE