Oscars 2017: What was PwC’s role in the best picture blunder?

Q&A: How are the winners counted? Why did Beatty announce La La Land as the winner? 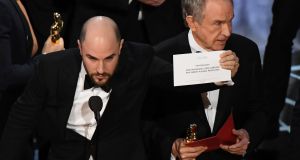 The spotlight has been shone on those responsible for the counting and handing out of the winners at the Oscars following the spectacular blunder that saw the wrong film announced as the best picture victor.

Accountancy firm PricewaterhouseCoopers (PwC) has apologised for the error, which saw presenters Warren Beatty and Faye Dunaway announce La La Land as the winner instead of Moonlight, before they were stopped by PwC’s Brian Cullinan and Martha Ruiz.

The company has said they are “investigating” the mix-up, which will go down in Oscars history as one of the prize-giving ceremony’s biggest mistakes ever.

Here’s what you need to know about the Oscars winner votes and how the error may have occurred.

PwC is the accountancy firm in charge of counting the 7,000 votes made by members of the Academy of Motion Picture Arts and Sciences, who vote via post or electronically, to collate the full list of winners for the Oscars.

Who are Brian Cullinan and Martha Ruiz?

Cullinan and Ruiz are partners at the US branch of PwC. They are responsible for manually counting the ballots for the 24 Oscars categories and collating the winners.

They are then tasked with transporting them to the awards ceremony to hand out to presenters ahead of each prize-giving.

How do they count the winners?

In the days leading up to the awards, Cullinan and Ruiz — with the help of a few colleagues — collect the 7,000 votes and count them manually.

Ruiz previously told the BBC: “Once polls close, we print everything and go through a very manual process.

“We do that for a variety of reasons. We want to make sure that no results reside in any one system or computer, and want to ensure a variety of different mechanisms (are used) to secure the process and the results.”

Who is aware of the Oscar winners before they are announced?

Only Cullinan and Ruiz know the full list of winners prior to the ceremony.

During the counting process, those helping them only see a “small fraction” of the paper printed out by Cullinan and Ruiz so as not to reveal the full list to anybody else.

Ruiz said: “It’s up to Brian and I to fully count everything together once, twice and sometimes multiple times to make sure it’s correct.”

What happens with the winners cards?

Two duplicate sets of winners cards in envelopes are produced and put into matching briefcases, which are carried to the red carpet and into the Dolby Theatre ahead of the ceremony.

Why are there duplicate sets of winners cards?

Two identical sets are made for safety purposes, in case one of the sets is compromised or stolen on the way to the ceremony.

Cullinan and Ruiz arrive separately and take different routes while flanked by security at all times to ensure they make it safely to the event.

Did Cullinan and Ruiz have the wrong winner?

No. Moonlight was the correct winner for best picture, but the incorrect envelope was handed to presenters Beatty and Dunaway.

What should have happened?

Either Cullinan or Ruiz, who stand at either sides of the stage throughout the ceremony to dole out the winners cards, should have handed Beatty and Dunaway an envelope housing the winner for best picture.

Why was the wrong envelope handed out?

PWC has said it is going to investigate how the mistake happened.

How was the mistake corrected?

Cullinan and Ruiz appeared on stage to correct the error.

The mistake was then addressed by La La Land producer Jordan Horowitz, who took to the microphone to reveal that Moonlight had been named best picture while holding up the correct winners card.

Why did Beatty announce La La Land as the winner?

Despite being given the card for leading actress, which had earlier been given to La La Land’s Emma Stone, Beatty thought the winner was the musical.

After the error was cleared-up, he returned to the microphone to say: “I want to tell you what happened, I opened the envelope and it said Emma Stone, La La Land, and that is why I took such a long look at Faye and at you.

“I wasn’t trying to be funny. This is Moonlight for best picture.”

How did Stone initially cast doubt over the mix-up?

Following the incident, Stone, most likely unaware that there are two duplicate sets of winners cards, said that she was holding onto her winners card as best picture was announced.

She said: “I also was holding my best actress in a leading role card that entire time. I don’t mean to start stuff but whatever story that was, I had that card. So I’m not sure what happened.”