Oscars 2017: how did I fare with my predictions? 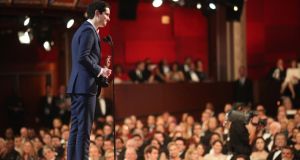 Something truly remarkable just happened at the Oscars. No, not that. For the first time, a film by an African-American director won best picture. Here’s another thing. The first film with a sincere LGBT theme has taken the top prize (no, Midnight Cowboy doesn’t count). Moonlight, which cost around $1.5 million, is also the lowest budgeted film to triumph since Rocky in 1976. We would need a qualified accountant to tell us if, when adjustments are made for inflation, Moonlight stands as the thriftiest film ever to take the gold medal. Would PriceWaterhouseCooper like to have a crack? Maybe not.

No Oscar watcher will be foolish enough to suggest that this heralds a new dawn for the Academy Awards. Something big and stupid will undoubtedly win in the next few years. We will probably have another year in which the Academy has to apologise for a lack of diversity. But the win does confirm that there is, at the glossiest awards in the calendar, a window for smaller independent films that deal with excluded citizens. Whatever won, pundits would be reading the result as a comment on Donald Trump. That doesn’t mean we shouldn’t celebrate the win as a kickback against the advance of intolerance. Note also that Mahershala Ali, the soul of Moonlight, is the first Muslim to win for acting. With Viola Davis triumphing in the best supporting actress category for Fences, the Oscars awarded two black actors for the first time in a decade. And let’s not forget Damien Chazelle’s unfairly backlashed La La Land. At 32, Chazelle is the youngest person ever to win a best director Oscar.

Ruth Negga was one of several nominees to wear a blue ribbon in honour of the American Civil Liberties Union (particularly significant in her case, as the ACLU brought the case that inspired Loving, for which she received a best actress nomination). Jenkins nodded to that organisation when receiving the award for best screenplay. “All you people out there who feel like there’s no mirror for you, that your life is not reflected, the Academy has your back, the ACLU has your back,” he said.

For all that, we can’t ignore the stunning muddle that ended the evening. From what we can judge, Warren Beatty and Faye Dunaway were handed an envelope containing the duplicate card for best actress. Dunaway, seeing “Emma Stone, La La Land”, read out the title of that film. The rest is already history. PriceWaterhouseCooper, long touted as the sober guardian of the results, issued an apology: “We sincerely apologise to Moonlight, La La Land, Warren Beatty, Faye Dunaway, and Oscar viewers for the error that was made during the award announcement for best picture.”

This was almost the perfect storm of a mix-up. If you are going to muck up a result, best not do it with the most important award of the evening. It’s also best not to accidentally reverse the defeat of what seemed to be a sure thing. Dunaway would have expected La La Land to be the winner and could be forgiven for stating what everyone thought they already knew. This is the biggest shock in best picture since Crash won in 2005 (beating, ironically, Brokeback Mountain, a film whose gay theme proved too dangerous for more conservative voters). It’s arguably the biggest shock since Chariots of Fire fell over the line in 1982 (beating, ironically, Warren Beatty’s own much favoured Reds).

I say “almost the perfect storm”. At least La La Land had six awards under its belt. How much worse would this have been if, say, Hidden Figures, which won nothing, had been mistakenly awarded the prize? That would have triggered a much longer and wearier walk back to the stalls.

At any rate, this meant that the vast majority of sad Oscar pundits – such as your current correspondent – ended up with one fewer correct than they originally thought. I managed to get 16 out of 24 right. That’s two fewer than last year. You might argue that 66 percent is not bad when guessing 24 races, almost all of which have five contenders. You would be wrong. As awards season becomes longer and busier, we get a better idea of how the riders are likely to fare against one another. Endless awards blogging adds to the information overload. A diligent observer should be happy with nothing less than 70 per cent.

Mind you, the short films – which rarely square up against one another before Oscar night – take very much their own unpredictable route. Many of the craft races are equally hard to assess. One of the more amusing results on Sunday was the awarding of best hair and makeup to Suicide Squad. A famously reviled film is now an Oscar winner. Take that, critically lauded Captain America.

When La La Land equalled the record for most nominations, it seemed reasonable to bet on a big sweep in the technical categories. Early losses in costume design and sound mixing indicated that this was not going to happen. Hacksaw Ridge’s triumph in editing perhaps pointed to an upset in best picture. But action films occasionally sneak that award and Mel Gibson’s uneven martial melodrama didn’t feel like a best picture.

Oscarologists smart the most at losses in the big races. There was actually only one really big surprise here. Like many, I felt that Denzel Washington would just sneak past Casey Affleck in best actor, but that always looked like a close competition. La La Land felt, however, like a near certain best picture winner. It had won everywhere that mattered: Bafta, Golden Globes, Producers Guild, Directors Guild. When Chazelle took best director the game was up. Right?

Well, a little less than a decade ago, the Academy changed the voting rules. Best picture is voted in a proportional system. Best director is first past the post. Since then the two races have split more often than ever before. Moonlight was obviously taking a lot of second preferences. This suggests that it appeals across the board. There’s a little more good news there.