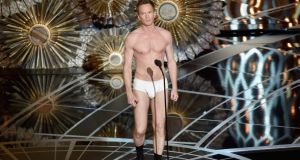 Love him or hate him, Neil Patrick Harris proved to be one of the hardest-working hosts in Oscar history on Sunday night, singing, dancing and even sprinting in his underpants onto the stage of Hollywood’s Dolby Theatre.

But the 41-year-old Broadway and television talent who came to prominence as the child star of Doogie Howser, MD, also confronted a major elephant in the room, opening the show with a fleeting but pointed jab at the homogenous field of Oscar nominees.

“Tonight we honour Hollywood’s best and whitest, sorry, brightest,” Harris enthusiastically deadpanned, to laughter that seemed to break the usual pre-show jitters among the movie royalty packing the auditorium for the 87th Academy Awards.

The opening joke was a reference to the criticism Oscars voters faced this year for nominating an all-white group of performers in the acting categories for the first time in many years, including the critically acclaimed star of the civil rights drama Selma, David Oyelowo.

Early reviews of the live ABC telecast, which ran about 40 minutes beyond its three-hour schedule, were generally unflattering. Harris himself drew largely harsh critiques from viewers chiming in on social media.

Variety credited Harris with getting the show off to a buoyant opening but faulted bad writing for what it described as a subsequent breakdown in the telecast.

In a comic homage to a memorable scene from best picture winner Birdman, Harris was followed on camera running from backstage onto the show’s main stage, dressed only in his white underpants, black shoes and socks, to introduce the presenters of the sound mixing award.

Time magazine’s early online review said Harris seemed off his game, despite having “been pre-sold as an expert live host”.

Harris was perhaps at his best showing off his chops as a song-and-dance man in the night’s opening musical number - a salute to movie magic that also marked a conscious effort to connect with tech-savvy younger television viewers.

“Check out the glamour, and glitter/ People tweeting on the Twitter / And no one’s drunk and bitter yet/ Because no one has lost,” sang Harris, the star of the hit CBS sitcom How I Met Your Mother, who has won three Emmys for his hosting of Broadway’s Tony Awards.

Another overt bid to reach younger viewers came with a musical performance of the pop duo Tegan and Sara teaming up with former Saturday Night Live star Andy Samberg and his Lonely Island bandmates for a rendition of the kids’ favourite Everything Is Awesome, from The Lego Movie.

However, parts of the ceremony were received well. Turning one of last year’s great Oscars faux pas into one of this year’s more successful comical interludes, John Travolta returned to the stage as a presenter with singer Idina Menzel, whose name he mangled at the 86th Oscars show.

He went out of his way to pronounce her name correctly this time, then rather sheepishly stood aside to leave Menzel the task of pronouncing the names of the best original song nominees. The winners, John Legend and Common, neatly brought the evening’s political and comic moments full circle.

‘There is something very cool about Irish people’
9