Mr Turner review: Spall grunts and swaggers his way through one of Mike Leigh’s greatest films 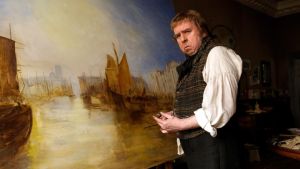 There is a scene about two-thirds of the way through Mike Leigh’s extraordinary study of JMW Turner when the painter, who is currently taking a lunge towards the experimental, finds himself excluded from the establishment’s inner circle. Queen Victoria herself has turned up a nose at his quasi-abstract landscapes. Nice pictures of dogs and horses are now the rage. There seems little else left to him but quiet decline in genteel Margate.

It’s not really worth trying to dig up parallels between Leigh and Turner. Whereas the painter fell out of favour after dramatically changing tracks, Leigh has spent four decades being lauded for making films in very much the same style.

Like Topsy-Turvy, his study of Gilbert and Sullivan, Mr Turner moves away from Leigh’s usual contemporary bourgeois concerns to tackle Victorian culture, but as ever the picture was developed using his well-honed improvisatory style. This is still recognisably the work of the man who made Bleak Moments during the Heath administration. Far from suffering critical decline, he is now an ornament of his generation.

Mind you, there is something of Leigh’s stubbornness in Timothy Spall’s portrayal of John Turner. Not a man to suffer fools gladly, the Cockney genius bumps his way about London and the territories with the swagger of a man confident in his genius.

Spall pushes the performance further and makes a divine farm animal of the painter. He communicates in grunts, snuffles and damp exhalations. At times, one imagines a Dickens character that, drawn in extremes on the page, shouldn’t make sense on stage or screen. Yet here he is: one of cinema’s broadest, oddest artistic masters. Few other directors would dare attempt something so downright strange. Not many could pull it off.

The film joins Turner in middle age. Already famous, he is set on developing new techniques – tying himself to a ship’s mast during a storm – and experiencing fresh technologies: photography, the railways. Interestingly, Leigh’s film rather takes Turner’s genius for granted. There is relatively little here about how he painted and not much about the importance of individual works. Leigh and Spall are more interested in playing with this semi-imaginary character they have created.

This Turner is a man weighed down by flaws. Though touchingly close to his father, he seems incapable of treating women in a humane fashion. This is where Mr Turner runs into problems. There is no reason not to make a film about a misogynist, but if so committed, you would be as well to paint the females in his life with interesting colours.

Turner is seen to be sexually involved with three women. His estranged wife (Ruth Sheen) is a shrew. The maid (Dorothy Atkinson) with whom he cavorts is practically a halfwit. The woman he settles down with (Marion Bailey) is an amiable character with a narrow worldview.

One hardly wonders that he has such a low view of the other gender. The appearance of Lesley Manville as pioneering Scottish science writer Mary Somerville feels like an effort to paper over those cracks.

That quibble aside, Mr Turner stands proud as one of Leigh’s greatest films. Freed from the contemporary suburbs, he allows Dick Pope’s cinematography to acknowledge the images in Turner’s paintings without ever slipping into cheap impersonation.

Gary Yershon’s angular orchestral score – like those singular pictures – manages to be both lyrical and mildly avant-garde. In passing, the film offers a sly comment on the shift from gritty Georgian sensibilities to the more hoity-toity standards of the early Victorian era.

“There is no place for cynicism in the reviewing of art,” a particularly pompous version of John Ruskin says in the film. Quite right. Thus chastened, we curl up our reservations and recommend Mr Turner heartily.

Monty Python hits Netflix. Here’s what to watch and avoid
6

Pierce Brosnan: ‘I was an only child from a fractured family’
10 Intense visions of the everyday
Real news has value SUBSCRIBE