New this week: Bohemian Rhapsody, Katie, The Hate U Give 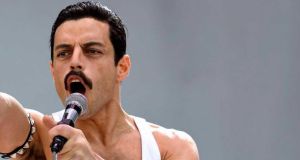 Delightful documentary on the rise of Bray’s Katie Taylor. The boxer emerges as a contradictory personality: shy, modest, but frighteningly determined. The storytelling around her is efficient, lucid and (ahem) punchy. Family and associates laud the boxer without ever becoming overly gushy. We get a taste of her attachment to Christianity. We get some sense of what drives her to greater heights. But, unlike Notorious, the recent makeweight Conor McGregor doc, Katie never feels like a product of the fighter’s marketing machine. Full review DC

Stirring, inspiring adaptation of Angie Thomas’s novel concerning a young African-American woman coping with the shooting of her friend by a cop. If anything, the film tries too hard to cover all angles of the debate. Her white boyfriend struggles to keep up; another pal reveals low-level racist tendencies. All this can feel a little schematic, but Stenberg’s mesmeric performance keeps the picture aloft. She has the gift of spreading warmth wherever she goes and her intelligence shines through in every scene. Full review DC

Michael Moore is back doing what he does: satirical montage, dubious stunts and powerful if sometimes unreliable reporting from the front line. This time round, we get (inevitably) a report from the front line of the Trump Wars. There’s something on the Parkland shootings. There’s something on the water scandal in the director’s hometown of Flint, Michigan. It may be familiar, but the jokes are still good and the anger is still righteous. If you like Moore you’ll like this. Full review/trailer DC

The 11th film in the Halloween franchise hovers somewhere between reboot and sequel. Forty years after the murderous events of the 1978 original, Laurie Strode (Jamie Lee Curtis) is a survivalist granny with PTSD whose paranoia and fears around Michael Myers has alienated her from her daughter (Greer) and granddaughte (Matichak). An early scene in Halloween 2018 dismisses the notion that Michael and Laurie are biological siblings. Boom. – everything you knew since 1981 is wrong. It’s the only innovation in this perfectly entertaining, decently scary, entirely predictable bit of fanservice. Full review TB

Marcello (Fonte) is a small, timid, kindly man who runs a dog grooming parlour on a largely abandoned sweep of the southern Italian coast. The neighbourhood is routinely terrorised by a coke-addled ex-boxer (Pesce), a monstrous variant of La Strada’s Zampano. Fonte, who was deservedly named best actor at Cannes earlier this year, brings an unforgettable pathos and a doleful expression pitched somewhere between Peter Lorre and Charlie Chaplin to his wronged beta-male hero. Full review TB

Westlife’s fans across Africa: ‘I listen to them every day’
9