Loveless review: an unflinching look at how bad people can be

Cannes 2017: Leviathan director Alexey Zvyagintsev tale of a broken marriage and a missing child is brutal in its pessimism

Russian director Andrey Zvyagintsev follows up his Oscar-nominated Leviathan with Loveless, a drama about a Russian couple going through a vicious divorce. 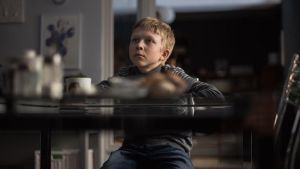 Torn between: Matvey Novikov in Loveless

In the opening 20 minutes of Alexey Zvyagintsev’s suffocating drama we encounter one of the most striking shots in recent cinema.

The large, pathetically spiteful Boris (Alexei Rozin) and the vain, unconnected Zhenya (Maryana Spivak) are bickering their way towards the worst sort of messy divorce. Both have lovers. He has already impregnated a trivial-minded young woman named Masha (Marina Vasilyeva). She is seeing the wealthy, middle-aged and – by the standards of this unforgiving film – relatively decent Anton (Andris Keishs). Few smidgeons of mitigating wit temper their savage arguments. They hate each other the way cats hate water.

In the midst of one particularly nasty bout, Zhenya retires to the darkened lavatory, urinates, wipes herself and re-engages with battle. The camera pans across to find Alyosha (Matvey Novikov), their 12-year-old son, standing unlit in the corner of the bathroom.

His tragically, furrowed face – crushed as if by a giant, thoughtless hand – telegraphs the sort of despair we saw in the young hero of Elem Klimov’s Come and See. It really is that striking. We have already seen them belittle and ignore him. When he does come into the conversation, he is used as a weapon.

Alyosha is at the heart of a film in which he barely appears. Shortly after this incident, he goes missing. The script is purposely vague as to who was supposed to be taking care of him. Zhenya returned from a night out and, without bothering to check his room, assumed that the boy was asleep. The police are summoned when he doesn’t turn up for school.

As in Zvyagintsev’s Leviathan and The Return, cinematographer Mikhail Krichman finds a sombre beauty in even the most unpromising locations. The damp outlands of Moscow, where volunteers search for Alyosha, have something of the Zone from Tarkovsky’s Stalker about them. The highlight of Evgueni and Sacha Galperine’s score is the pounding piano refrain that bookends the action.

All this combines to create an atmosphere of overwhelming pessimism. When we encounter such stories in serious cinema we usually find ourselves forgiving the flaws and imperfections that trouble all parents. Who are we to judge? Not so much here. Zvyagintsev has been brave enough to construct his story around bad people and bad parents. They are selfish. They are unmannered. They shut themselves off from empathy until confronted with an unavoidably horrible reminder of Alyosha’s potential fate. There are such people.

Zvyagintsev offers no excuses. But he does engage with reasons. The online world offers distractions from responsibility. We get a sense of the surrounding corruption when, in a fashionable restaurant, an attractive woman willingly hands over her telephone number to a stranger and then returns to her date. Then there are the parents of the parents. Zhenya’s mother, holed up between massive gates on the road to Kiev, is a monster of tyrannical proportions.

Zvyagintsev does perhaps over-egg his case when he layers final scenes with news footage of violent chaos on Russia’s borders. We have, however, rarely encountered a film that so powerfully exercises Philip Larkin’s argument about man handing misery on to man. It deepens like a coastal shelf, I’m told.