Louder Than Bombs review: Exploring the deafening silence of loss 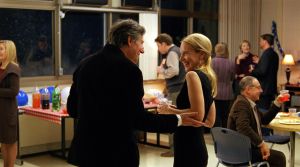 Gabriel Byrne and Amy Ryan in Louder Than Bombs

As Louder Than Bombs opens, Jonah (Jesse Eisenberg) awkwardly cradles his newborn son before an excursion down the hospital corridor brings him into the path of an old flame (House of Cards’ Rachel Brosnahan).

Jonah fails to mention the baby, a selfish omission that rather sets the tone of the parade of secrets and lies to come.

Jonah’s reluctance to embrace fatherhood is ghastly, but there are mitigating circumstances. The eldest son of former heartthrob Gene (Gabriel Byrne) and war photographer Isabelle (Isabelle Huppert), he and dad have never discussed his late mother’s suicide with younger sibling Conrad (Devin Druid). Dad, meanwhile, has not revealed his relationship with Conrad’s teacher (Amy Ryan).

Conrad is a budding writer, whose musings and deeply buried inner life impress his older brother – and who knows all about his overprotective father’s attempts to stalk him.

This tangle of deception is played out in lengthy silences, unwanted offers of tacos and breakfast, and looping monologues. Trier’s screenplay, co-authored by Blind director Eskil Vogt, might have been overly literary were it not for the director’s layers of image and montage.

The performances are, necessarily, deep and deeply affecting: Eisenberg weasels without being too alienating; newcomer Druid carefully layers his character; Ryan makes a much larger impact than the size of her role ought to allow for.

Even in scenes set before her fatal car crash, the dead- eyed Huppert haunts the picture. And Byrne never fails to move as a family man who simply can’t win.