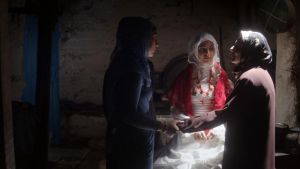 In deepest Turkey, naive village girl Ayse (Begum Akkaya, excellent) is married off to a handsome young Austrian named Hasan. If only. We learn, as she does, that the colourful wedding ceremony is a sham. Ayse, in fact, is being passed on as a kuma – that is, a second wife. Her husband will be Hasan’s elderly father; Hasan, as it happens, has no interest in girls.

Ayse’s loudest supporter, and the reason she has been recruited to the purpose, is Fatma (Nihal Koldas), wife No 1. The older woman is undergoing chemotherapy and wishes to train in a replacement caregiver for her five children, three of whom are grown up. The comparatively westernised eldest daughters are against the idea and are soon taunting their new family member - “a country bumpkin” – in a language she can scarcely understand.

One sister appears to be softening until the domestic arrangement takes on further complications: Ayse gets pregnant and Fatma gets the all-clear, leaving the newcomer cast in the unlovely role of sexual and domestic skivvy. Is there no end to the Turkish girl’s subservience?

That question forms the taut dramatic arc at the centre of Umut Dag’s riveting debut feature. Kuma’s increasing tensions are matched only by the ferocity of the onscreen performances: Akkaya’s Ayse is vulnerable and obedient while all around her posture and fume. But even the girl’s beautifully articulated masochism is no match for the horrendous and inhuman status she has been accorded.

Tightly framed interiors and repeated shots of tiny apartment corridors underline an absence of privacy and an increasing sense of imprisonment. Clashes between the family’s Viennese surroundings and the outmoded Muslim practise at the heart of the story are deftly and subtly handled in a screenplay co-written by the director and Petra Ladinigg.

The results are as intriguing as the subject is vexing.