Julianne Moore is the army brat who became a soap opera star and the doyenne of independent film. Now she’s won a best actress Oscar for ‘Still Alice’, will she finally be recognised as one of cinema’s finest actors?

Chappie and Still Alice get the once-over from Donald Clarke and Tara Brady. And how are journalists portrayed by Hollywood? Video: Niamh Guckian 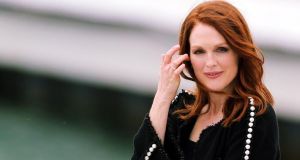 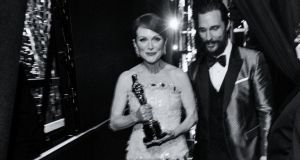 Julianne Moore has, as we meet, not yet won her Oscar for Still Alice. That’s to say the statuette has not been physically placed in her hands. She is, however, such a strong favourite that the ceremony is beginning to look like a formality. At 1/50 with most bookies, Moore – on her fifth nomination – is the surest thing since Helen Mirren won for The Queen. Indeed, some bookmakers . . .

“For real?” she interrupts, aghast at the Irish Times’ oddsmastery. “Spend some time at the track, do ya?”

Maybe a little. So has she allowed herself to take the win for granted?

“Oh good lord, no. I think I’m so lucky to even be in a conversation about this stuff. There are so many great performances every year and so many great films. So to get to the point when you’re being spoken about in this way . . . Oh my god, what an honour.”

Moore probably deserved the Oscar. Her performance as a middle-aged woman stricken with Alzheimer’s disease pulses with all the nuances we expect from this fine actor. But it can’t be denied that the Academy was desperate to put a nude gold man her way. Raised as an army brat, later a soap opera star, the former Julie Anne Smith has been the best thing in good films for a quarter of a century now.

There’s something else: everybody just loves her. Throughout our conversation, Moore displays an unforced openness that must be hard to maintain while running the gruelling press gauntlet. And, darling, she looks fabulous. Now an absurdly unlikely 54, Julianne, her emerald dress in sympathy with those famous ginger looks, seems to have barely changed since she emerged in films such as Safe and Short Cuts.

Born in North Carolina to a soldier dad (later a military judge) and a Scottish mother who worked as a psychologist, Moore moved around a great deal as a kid. Many actors say that sort of lifestyle offers accidental training.

“Yes, I think there are so many times when you talk to actors you discover they’re ministers’ kids or corporate kids, or their parents are in the state department or the military, or are travelling salesmen or all these different things. So, I think that moving around, you realise that behaviour is mutable, that behaviour can change so how you behave is not who you are. You can go somewhere and behave a completely different way and at the core of it there are certain things.”

That makes sense. But she still had to flog the idea of an acting life to formidably successful parents. There is a cheeky scene in Still Alice that finds Moore’s character, a linguist, pressing her daughter, played impressively by Kristen Stewart, into sidelining her acting ambitions and taking a “proper” degree. I imagine most of the cast must, at some point, have been on the other end of that conversation.

“I’m telling her not to be an actor?” she says. “Well, when I told my parents I wanted to be an actor they said: ‘You can’t go to a conservatory. You need to go to college, because if it doesn’t work out we want to make sure you can go to graduate school.’ I thought, in retrospect, that’s fantastic advice, but I think I even accepted it then. I was like, okay, that seems reasonable. They paid for school and everything.”

Trust Moore to be nice about it. It really is impossible to imagine her flinging soup in her parents’ faces and calling them fascists. Four years ago, in honour of her late mother, who was born in Greenock, she applied for UK citizenship and is proud to consider herself Scottish.

“When my father was applying for some jobs for graduate school he wasn’t allowed to be married to a foreign national, so she had to go and get her citizenship, so they made her renounce her British citizenship,” she says. “I was seven years old, she was 27, and she came home crying holding an American flag. I’ll never forget it. It broke my heart. And so, you know – oh my god, I’m going to cry – so when they changed the rules I wanted to do it for my mother. She would have loved it.”

She does indeed begin to tear up. Some swallowing goes on. Hands are fluttered before eyes and, a professional from head to toe, she stubbornly pulls herself together.

Frannie and Sabrina Hughes in the daytime soap opera As the World Turns.

She left the series in 1988 (after winning a Daytime Emmy) and returned to the theatre. You can see her in The Hand that Rocks the Cradle and The Fugitive, but it was her turn in Robert Altman’s Short Cuts, released in 1993, that really pushed Moore above ground. She rapidly became a favourite of many young, independently minded film-makers. Todd Haynes made stunning use of her in Far From Heaven and Safe. She appeared in Paul Thomas Anderson’s Boogie Nights and Magnolia. Neil Jordan cast her in The End of the Affair. By the end of the last century, Moore was a kind of unofficial figurehead for a resurgent offbeat cinema.

“Of course the granddaddy of them all was Altman,” she says. “They were all interesting films that were being made for very little money so that we didn’t have to have the responsibility of having to make a lot of money back.”

Moore has dipped into mainstream films with varied results – she is currently a player in the Hunger Games franchise – but she never strays too far from that independent template. Directed by Richard Glatzer and Wash Westmoreland, Still Alice attacks its subject with great tact and sensitivity. More than a few Alzheimer’s groups have praised its accuracy and seen it as a useful educational tool.

“I knew nothing about it. I think I’m one of those rare people who didn’t have a family member afflicted by Alzheimer’s,” she says.

Winning the Oscar is hardly likely to change Moore’s life very much. She was already the actor every respectable film-maker wanted to work with. Certainly, there seems no suspicion that the award will shatter her relatively unstarry lifestyle.

Married to director Bart Freundlich since 2003, Moore, who has two children, lives among the hustle and bustle of downtown Manhattan. Unlike those who squat behind great walls in Bel Air, she is among real people all the time. I imagine that must, for a celebrity, bring concomitant difficulties.

“Ironically, no. I’ve lived there a long time,” she says. “Coming back from LA after the Golden Globes – we keep our car in a garage across the street – and everybody in the garage was all like: ‘Yaaaay!’”

Golden Globe? A mere paperweight. The garagistes of Greenwich Village really have something to party about now.