Julian Barratt: from The Mighty Boosh to a ‘Partridgean joke’ 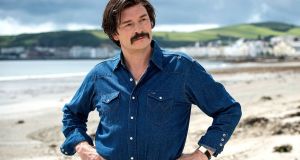 Julian Barratt on his role in Mindhorn: “He’s a vain, pompous chap. But you can’t dwell on that too much, because it’s not funny”

Having leafed through Julian Barratt’s various encounters with ladies and gentlemen of the press, I’m half-expecting the comedian, musician and actor to turn up with a shell attached to his back.

Said exoskeleton would surely be in keeping with The Mighty Boosh aesthetic: Barratt and his comic partner Noel Fielding first conceived the Boosh while playing a giant penis and a whale (respectively) in Stewart Lee’s Edinburgh festival show King Dong vs Moby Dick.

But a carapace might also be rather useful for a performer who is so often described as awkward or introspective.

“I think I did get a bit of a reputation at some point,” says Barratt. “I have been a bit weary of it all. But I think that’s because when you’re with someone like Noel, it’s easy to be the introspective one. Noel loves talking to people: he’s very chatty, he really loves to engage; he dresses up like a lovely flower. I find the pressure to be funny when you’re being interviewed live quite intense. But Noel loves that stuff. He loves that challenge and rises to it. Beside that, I’m always going to look like the serious one. I’m the one in background. The one on keyboard with the Sleaford Mods.”

So we shouldn’t expect him to join Fielding at his new post on The Great British Bake-Off any time soon? “Yes, well, obviously they asked me first,” says Barratt. “I said, ‘look, I’m just too expensive. But I know someone.’ ”

Barratt is dry and certainly self-deprecating. But he’s quite unlike the shrinking violet that he’s often written as. That is just as well. As one half of The Mighty Boosh, Barratt spent much of the first decade of the millennium touring enormo-domes and gracing the cover of the NME. For a self-confessed life-long “jazz noodler”, this latter honour was the wrong magazine for the wrong thing.  “I always dreamt of being in Kerrang,” says the 48-year-old. “That was my ambition. I read that religiously when I was into heavy metal. Then the jazz magazines took over. Meaning magazines about jazz music. Not the other kind. I don’t know if it’s a male thing. But I really became bloke-with-guitar-magazine. That quite macho competitive musical environment with images of really muscular guys playing really fast, really difficult chords. The guitar solo was a big thing when I was growing up. Everybody wanted to be Van Halen. So when I played my first live gig I had long hair, a white suit, a red Strat copy and cowboy boots. Playing the guitar solo from Beat It. Different times.”

He gestures around the room: “All of this is just window-dressing for jazz fusion guitar. Life without music would be a mistake. But this other stuff can be quite good fun. I am sitting here surrounded by dolls of myself, I suppose.”

He sure is. As I meet Barratt in London, he’s surrounded by LPs, drinks trays, and, yes, action figures, all bearing his likeness and all meta-movie merchandise for the new comedy Mindhorn.

Rest assured, it’s a gag, not an ego-trip. Mindhorn, a psychic TV detective who solves crimes and catches villains on the Isle of Man, is introduced as a very 1980s phenomenon, pitched somewhere between The A-Team and Bergerac. Fast-forward to the present day, and Mindhorn’s titular star Richard Thorncroft (played by Barratt) is a self-absorbed Partridgean joke and – having lately been replaced by John Nettles in an orthopaedic sock advertising campaign – an out-of-work actor.

When a delusional, Mindhorn-obsessed murder suspect (Russell Tovey) demands to speak to the fictional detective, Thorncroft is summoned to the Isle of Man to assist the police with their manhunt.

Being an actor is always quite nerve-racking. You’re thinking, Can I do this? As a comedian it’s even worse

“I suppose you’re only ever a few missteps away from being Richard Thorncroft,” says Barratt. “We all have those days when you’ve done something you know is . . . well.”

He tails off, diplomatically. Quite unlike his onscreen alter-ego, Barratt’s increasingly varied CV includes Charlie Brooker and Chris Morris’s satirical sitcom Nathan Barley; a 2011 production of Gogol’s The Government Inspector at the Young Vic Theatre; the black-hearted Channel 4 dramedy Flowers; a miniseries adaptation of Treasure Island, and Ben Wheatley’s Cromwellian horror, A Field in England. Still, he understands Richard Thorncroft’s professional panic, even if he has no real experience of typecasting.

“Being an actor is always quite nerve-racking. You’re thinking, Can I do this? Can I still do this? As a comedian it’s even worse. It’s impostor syndrome all the time. So I can relate to Richard’s ongoing terror. He’s a vain, pompous chap. Tragic, really. But you can’t dwell on that too much, because it’s not funny.”

How does writing with Simon Farnaby differs from writing with Noel Fielding? “Oh, Noel and I have a very different process. At times, I’m very pragmatic and laid-back and I want to get to the end without getting too worried about things or agonising over details. Simon is like that, too. He pushes through where Noel and I get furious with scripts. If they aren’t funny in the right way, we have to have a blowout. Not even with each other. Just a general kicking-over-table moment shouting ‘This is shit’ before we can get anywhere.”

The blowouts, he notes, are infinitely preferable to writing alone. “The psychology just doesn’t suit me. Writing can make you feel a bit psychotic. You create a world and you’re sitting inside it all day long, talking to people who are not really there. I like the point in the process when it starts to become real. You finally get to talk to other people. But the actual process of writing is so lonely. When you’re writing with someone else, you come up with an idea and you laugh. And some day you go out for a drink or something and you remember the time you came up with that idea. And you laugh again. But on your own, you just go a bit mad.”

Nowadays, such mad activities require carefully scheduling in a household that includes Barratt’s partner, the comedian and writer Julia Davis, and the couple’s nine-year-old twins, Arthur and Walter.

“So when I’m not working I’m very busy. I’m not ever not busy. Because my other half does the same thing I do and we have to balance all that so that one of us is there when the other isn’t.”

He pauses: “I suppose the comedy and the music and the writing is what I’ve been doing my whole life. I can’t really do anything else. I’d have to retrain.”

Duck-tective in Gravity Falls
He has “really quacked the case”. We’re told the references in this feathered Sherlock Holmes TV show are too sophisticated for the kids of Gravity Falls. Thus, not unlike Gravity Falls.

Jesus and Pals (in South Park)
The popular biblical character Jesus (voiced by South Park co-creator Trey Parker) hosted a public access television cable show . . . until he was killed by Iraqis while attempting to save Santa Claus.

The Itchy & Scratchy Show (in The Simpsons)
A fantastically violent parody of Tom and Jerry: featuring all of the sadism, and none of the racist stereotypes of the Hanna-Barbera original.