John Turturro: Not just a gigolo

Actor and director John Turturro plays a florist turned sex worker – and Woody Allen his pimp – in his new film. He talks to Tara Brady about giving screen time to a character who can do anything with his hands 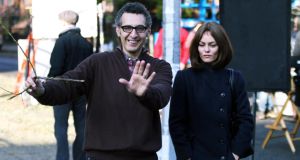 John Turturro is from New York. You don’t need me to tell you that. He has that hurry in his voice and that restlessness in his posture. Subway fumes run through his veins and stop signs flash behind his eyes. Turturro was born in the vast borough of Brooklyn and then moved to Queens. Mom was a jazz singer and Dad worked as a carpenter. You don’t get more old-school than that.

If we were in any doubt about this, then Fading Gigolo would surely set them aside. Turturro is still best known as an actor: star of endless Coen brothers films and quite a few by Spike Lee. But he has also been busy as a director. Fading Gigolo is his fifth feature and it throbs with Brooklyn rhythms.

“There were so many worlds in there,” he raves. “I could have had a lot more worlds in there too. I wanted to touch upon certain socioeconomic groups and religions. I’m just trying to represent a little bit of the city as I know it – as I see every day.”

We get you. The film stars Turturro as an ordinary florist who, one day, hears an unexpected proposal from a local bookshop owner. Perhaps he would like to try his hand at being a gigolo. It all goes well and this hitherto ordinary fellow finds himself moonlighting in the world’s oldest profession.

“Look, sometimes the things you see in New York are so crazy and unusual and unbelievable that it’s quite a job making those things credible,” he says. “Even though they exist.”

So, this really happened?

“The character I play is based on a guy I know who is the most confident man I know.” Turturro laughs. “He can do anything with his hands. Anything. Build a house. Do plumbing, cooking, electrical.”

Fading Gigolo’s big selling point is that it features a rare performance by Woody Allen in a film not directed by Woody Allen. The living legend plays the old chum who ends up becoming the hero’s, well, pimp, I suppose.

Turturro and Allen are both Brooklyn boys, albeit from different generations. They must know one another.

“My haircutter told him I wanted him to play a pimp,” he explains. “My haircutter, Anthony, is also Woody’s haircutter. So he told Woody to call me. The first thing he said was . . . ”

He drops into a perfect impersonation of the Woodster. “‘So, we share a haircutter. Huh, huh?’ Actually, he really liked the idea. The haircutter is in Manhattan. But he’s from Brooklyn and Woody’s from Brooklyn. So it’s kind of a Brooklyn story.”

As Turturro suggests, Fading Gigolo is promiscuously stuffed with New Yorkers of all faiths and backgrounds. A subplot features Liev Schreiber as a figure in the Hasidic Jewish community. One assumes that, growing up as an Italian kid in Brooklyn and Queens, Turturro swam in the metaphorical melting pot.

“I grew up in a black neighbourhood. And then I moved to a neighbourhood that was Irish, Italian and Jewish. And, you know, at that time we’d all be friends, but the Italian and Irish guys would have fights all the time. And if you went out with an Irish girl it was kind of considered to be intermarriage. But then people get to know each other.”

Turturo showed promise early on and went to study Theatre Arts at the State University of New York before moving on to the eye-wateringly prestigious Yale School of Drama.

He had been around for a while (you can spot him in Raging Bull, Desperately Seeking Susan, Hannah and Her Sisters) before he properly caught our eye in Spike Lee’s Do the Right Thing (1989). Lee has, we assume, been an important figure in Turturro’s life.

“Ah, Spike and me are friends. We go out sometimes. But it’s only four movies I really had big roles in. The rest were cameos. He came to think of me as a good luck charm, I think. But I don’t really do that anymore. I said to him: ‘You want me to do a real role, then fine’. But we’re friends. And you can tell friends that sort of thing.”

Profiting from the boom in US independent cinema of the 1990s, Turturro went on to appear in such fine films as Miller’s Crossing, Fearless, Quiz Show and Cradle Will Rock. He is, of course, one of the funniest things in the Coens’ The Big Lebowski. But he’s not just an indie guy. You can spot him in Adam Sandler pictures vehicles Mr Deeds and You Don’t Mess with the Zohan. Heck, he’s even appeared in two of the dreaded Transformers movies. Being in those blockbusters must feel like an entirely different job.

“Working with Adam and Transfomers? It’s like you’re doing a sketch, not an oil painting. I never did those things until later on in my career. I turned them all down. But my kids wanted me to do a couple of big movies. So I thought, okay. Fair enough.”

So many film-makers and actors say that it’s still possible to make a film for nothing and to make film for $80 million, but it’s very difficult to get one made for a reasonable price. This may explain why our John now appears in the occasional blockbuster.

“Yeah, the medium-sized films that I used to make a good living from are gone. Now it’s all small films and big films. I try to do the best I can do. It’s like a little workout of a different kind.”

Less jumpy in real life, but still intense, John Turturro seems like a sincere sort of fellow. Those big movies really are the exceptions in his career. Just look at the effort he put into making sure that Francesco Rosi’s The Truce, a study of Primo Levi’s experiences after the war, eventually made it onto the screen in 1997.

“I worked on that movie, The Truce, for five years. I think it’s one of the best things I’ve ever done. But once it’s out there, somebody can discover it and be affected by it. So I don’t care if more people saw me in the stupid movie. Why would I?”

You tell ’em, John. That’s the New York way. yyy Fading Gigolo is out now and is reviewed on page 12