Jack Reynor: ‘I was afraid of being Han Solo’

The Dublin actor on ‘Transformers’, ‘The Secret Scripture’ and why he’s wary of Hollywood 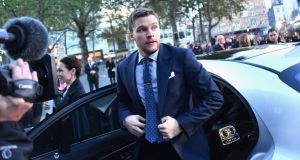 Jack Reynor: “I don’t want to shoot myself in the foot when it comes to getting work. But I’m just not as interested in most of the films that are made in the States. The characters aren’t as compelling. The stories aren’t as substantial.” Photograph: Gareth Cattermole/Getty Images

Jack Reynor bounds across the room as if we’ve known each other for years. Come to think of it, we do go back a bit. Aged just 25, the Irish star has been bouncing – and that is the operative word – around the interview circuit for quite some time. He may be slightly rattled by a bumpy flight from Glasgow but he’s already chatting away, rattling off a list of collaborators.

“Cédric Jimenez, Justin Kurzel, Lenny Abrahamson,” he says. “That’s what I love. Phenomenal talents who are on the cusp of great things. The best thing is to be part of what makes them successful rather than coming along afterwards, and latching on to become just a by-product of that success.”

Blame it on the frozen foods.

Back when the millennium was in its infancy, the nine-year-old Jack Reynor had an afterschool job assisting his grandfather on his delivery route, a gig that proved ideal training for the future slings and arrows of the movieverse.

“He had a frozen food franchise and I’d go knocking on people’s doors in Tallaght and Clondalkin and all over,” recalls the Colorado-born, Wicklow-raised actor. “I was a very forward kid. Quite intense. I’d walk right up to you and say, ‘How are you? My name’s Jack.’ So I’d go up to people’s doors trying to sell food out of the back of a van. Some people would find it quite endearing; others would slam the door in your face.”

Not that there have been too many slammed doors for Reynor the actor. He wandered into his screen debut, as an altar boy in Kevin Liddy’s Country, which was shooting down the road from his home in Wicklow in 1999.

There’s no need to live in LA. Half of Hollywood’s films are shot in London, anyway

He had just finished his Leaving Cert at Belvedere College when he scored his first starring role in a feature film, playing the boy-next-door in Kirsten Sheridan’s experimental, unscripted Dollhouse. Even before that breakthrough, his mentors at the Actors Studio in the Factory had noted that there was something about Jack.

“The Actors Studio housed a powder-keg of potential film stars,” recalls Shimmy Marcus. “But the question with Jack was not if, but when.”

“The Factory was an amazing establishment,” says Reynor of his alma mater, which has subsequently relocated to Bow Street. “When we started our Actors Studio, there were only 15 of us. There had initially been 30 but within three weeks half had dropped out because it was so f**king cold. So we have the cold to thank. Because that separated out the people who really wanted to be there, who really wanted to act. I had a good two years in there and it helped me to develop an awful, awful lot.”

Reynor made a huge splash with his 2012 performance in Lenny Abrahamson’s impactful drama What Richard Did. The film – based on Kevin Power’s Bad Day in Blackrock, a fictionalised novel inspired by the death of Brian Murphy in 2000 – picked up five awards at the 10th Irish Film & Television Awards including one for Reynor’s titular turn.

“Jack, at 19, landed into the casting for What Richard Did like a kind of miracle,” recalls Abrahamson. “A fully realised talent – extraordinary maturity. He’s also completely lovely as a person. He does like a cake – and in that we are very much united.”

Reynor followed Richard with the $250 million Michael Bay vehicle Transformers: Age of Extinction. And that, so everyone thought, was surely the opening gambit in the young Irish thespian’s glossy new Hollywood career. Headlines and rumours suggested that he had landed a major role in Star Wars: The Force Awakens, and that he was shortlisted for the role of a young Han Solo in the incoming Star Wars prequel from The Lego Movie directors Phil Lord and Chris Miller. Reynor was not sorry to see Hail Caesar! star Alden Ehrenreich land the role instead.

“That Han Solo movie is going to be really tough,” says Reynor. “I think the guy who is doing it is a really good actor, but, for myself, I was afraid of it. I kept thinking: if you f**k this up you’ll ruin people’s childhoods. If it doesn’t turn out great, you won’t be forgiven. That’s a lot of responsibility. And even if it goes great, you’ll do it, people will know you only from that and that defines your career. That would be very difficult. For me, working on original material is very important.”

Having stayed Stateside just long enough to essay one of Vince Vaughn’s 533 children in the paternity comedy Delivery Man, Reynor returned to this side of the Atlantic: all the better to craft a meaty, character-driven CV with films such as Gerard Barrett’s Glassland (2014) and John Carney’s Sing Street (2015).

A cynical person might suggest Transformers ruined Hollywood for him.

“There’s no need to live in LA,” he says, diplomatically. “Half of Hollywood’s films are shot in London, anyway. I don’t want to shoot myself in the foot when it comes to getting work. But I’m just not as interested in most of the films that are made in the States. The characters aren’t as compelling. The stories aren’t as substantial. I’d rather stay here. Maybe there’s less money over here. Maybe there’s less of a profile. But that suits me.”

A lot of people have said to me he’s a douche, but he’s an endearing douche. I’ll take it

He may be (mostly) done with Hollywood, but Hollywood is not done with Jack Reynor.

“It’s not for lack of offers to be in big Hollywood franchise films,” he says, even more diplomatically. “I’m just not stimulated by doing that kind of work. Its asking me to do a completely different job from what in actually do. I’m often in a position where people are trying to convince me to do Gods of Egypt or Independence Day. These things come past me all the time. And I’m just not doing that shit. That shit will kill your career. I want to go the distance. In half a century’s time I want people to say: that guy has got a really good body of work. I’m committed to that.”

In this spirit, Reynor features in two very different films this month. He plays a Sligo shopkeeper who joins the RAF during the second World War in Jim Sheridan’s adaptation of Sebastian Barry’s The Secret Scripture, and he stars alongside Cillian Murphy, Brie Larson, Armie Hammer and others in Ben Wheatley’s manic shoot-’em-up Free Fire.

“Ben has a thing about guns,” says Reynor. “We’ve got so many action movies now, where everything is being blown up, all the time. So we don’t even hear the explosions anymore. We don’t hear the individual gunshots. We’re not threatened or intimidated by action. He wanted to make an old-school action film which makes firearms intimidating again. And I think he executed that really well.”

His character, Harry, is one of the least-likeable people in a room full of blasting, weapon-trading villains.

“Yeah, exactly, he’s a bit of a douche,” smiles Reynor. “He’s obviously a shit-kicker. We know – we’re told – there has been some business with a cousin, so maybe it’s justifiable violence. A lot of people have said to me he’s a douche, but he’s an endearing douche. I’ll take it.”

Between The Secret Scripture and HHhH, a historical drama based on Operation Anthropoid co-starring Jack O’Connell, Reynor has suddenly become accustomed to period costume. I wonder how this affable, sometimes sweary fellow – who couldn’t be more contemporary Leinster if he had a blue jersey tattooed permanently onto his torso – manages to sit on all his modern mannerisms.

“You do have to temper some of your idiosyncrasies,” he nods. “But at the end of the day if you worry about that sort of stuff too much, you’ll box yourself in and leave yourself with no room to do your job or to connect with the audience. Just worry about the context of the material. If you can get to the heart of that, you’ll be forgiven for just about anything.”

This side of the pond seems to suit Reynor, a chap who looks happier in jeans than in a dinner jacket, and who speaks with a semi-religious wonder of nights in front of the telly with his long-time girlfriend, the Irish model Madeline Mulqueen.

“I’ve got a curved 65-inch screen at home and I just sit there and watch movie after movie at the end of the day,” he says. “It’s great. I watch a lot of Japanese films; a lot of French cinema; a lot of Scandinavian cinema. I like that the language gap leaves you with more room for your own imagination.”

Six years after his big-screen teenage debut, I wonder how Jack Reynor’s view of the industry has changed.

“I was always sceptical to some degree about the fame stuff. And now I’m ultra-sceptical. I’m not saying that to be the kind of wanker who complains about being in films. But I know that I’m not doing shit for money. Take the money and no one will want you for the good stuff. I want to keep my powder dry. How much f**king money do I need? I’m 25 years old. There was a time – and it was a long, long time – when I had absolutely zero money. I didn’t know what I was going to do with myself. And now I’ve got enough money to live in a nice house, to drive a nice car. I don’t need much else. If I can put some savings away, I’m laughing.”

He grins: “I’ve learned the value of quality. Years ago, I did do that Chasing Leprechauns thing for the Hallmark Channel.”

Now that is worse than frozen food delivery.