After a 50-year career, Bruce Dern is finally getting some Oscar attention. Acting is “an endurance competition,” he says. “It’s like a marathon: you don’t start racing until mile 16. It will take a long time,” he tells Tara Brady 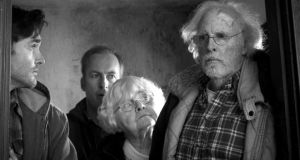 ‘It’s a part I’ve waited 77 years for.” When Bruce Dern’s turn in Alexander Payne’s Nebraska deservedly took the Best Actor prize at this year’s Cannes Film Festival, it was only the long-serving thespian’s third visit to the Riviera’s ritziest shindig. Really? After more than 50 years in the biz?

“The first time was with Mr Hitchcock, ” recalls the veteran actor. “We opened the festival and they were honouring him. In 1979, I came with Coming Home with Jane Fonda and Jon Voight. It’s the same as everybody getting ready for the World Cup every four years. But Cannes is special even more than that. It’s like breaking into a house thinking ‘they’ll whip me if they catch me’. But I guess there’s nobody who’s going to whip me now.”

We’ve all read Hitchcock’s quips relating to the acting fraternity – “I never said all actors are cattle; what I said was all actors should be treated like cattle”; is that how Dern, who worked with the Master of Suspense on Marnie and Family Plot, remembers Hitchcock’s directing style?

“Thing is,” laughs Dern. “I had more freedom when the switch was on in Family Plot than I have had until I started working with Alexander. On the first day, I said ‘Why me?’ And he said: ‘Bruce, Mr Pakino [sic] wanted a million dollars.’”

Dern, even in supporting roles, has long cast a giant shadow across the movieverse. He shoots John Wayne in the back in The Cowboys (1972), steals a police motorcycle in Roger Corman’s The Wild Angels, and dreams of crashing a Goodyear blimp over the Super Bowl X in Black Sunday. For more than five decades, he has radiated a sense of danger across westerns (High ’Em High), science fiction (Silent Running), car chases (The Driver), comedies (The ’Burbs) and family entertainment (The Hole 3D).

Age – he’s now 77 – has not wearied him. He can still do a mean, wide-eyed crazy: check out his twisted Mormon polygamist on HBO’s Big Love (2006 -2011) and his turn as Jamie Foxx’s former owner in Django Unchained.

Perhaps more than any artist – more, even, than his old pals Jack Nicholson and Peter Fonda – Dern has come to personify post-classical Hollywood. He’s the guy who can’t keep up or get down with counterculture in Coming Home and Drive, He Said. He’s the guy who’s plum out of luck in The King of Marvin Gardens and They Shoot Horses, Don’t They?

In person, Dern couldn’t be less like the nogoodniks and ne’er-do-wells he so frequently plays on screen. He has never consumed coffee or alcohol and he has been married to Andrea Beckett for 45 years. An affable chap and an engaging raconteur, he’s quick to ask after Robbie Keane and the fortunes of the Irish team.

“My first paid job as an actor was doing a Sean O’Casey play called Shadow of a Gunman,” he beams. “O’Casey was still alive then and he came to see it. Lee Strasberg directed it on Broadway. Actors Studio actors doing this play. In the play, Strasberg said, ‘You and Jimmy Green have only one scene. The rest of the play I want you to go up to your dressing-room and we’ll give you newspapers and we want you to talk to one another about 1916, the church, sports, the IRA and whatever. I remember his daughter, Susan Strasberg, raising her hand and saying ‘Daddy’. ‘Not here,’ he said. ‘Here, I am your director, Suzy.’ She said we’ll be able to hear them. And he said: ‘It’s a tenement. Talk over them. This play is not about you. It’s about 1916 and Dublin. There would be talk everywhere.’”

Although the early part of his movie career was characterised by gunslingers and bad- asses, Dern hails from an impeccably patrician dynasty. His paternal grandfather was the governor of Utah and secretary of war. His uncle was poet Archibald MacLeish; his godfather was Adlai Stevenson, who ran for president in 1952 and 1956; his godmother was Eleanor Roosevelt. He wore white cuffs at the dinner table through his school years at New Trier High School in Winnetka, Illinois, the alma mater of Rock Hudson, Richard Widmark, Charlton Heston, and Elizabeth Perkins.

He attended the University of Pennsylvania for two years, hoping to crack the Olympic team as a runner in the 800 metres.

“My main competitor was Ron Delany who won the Olympic gold medal for 1,500 in 1956. Where I went to college, Delany was about 12 miles away. He ran like the oddest style I’d ever seen. Ireland had a connection with the colleges at that time. Eamon Coughlan went to Notre Dame after that. All those great middle-distance runners came out of Ireland at that time. I’ll always have a great reverence for the endurance of Ireland because Ron Delany beat my brains out running.”

Does the actor still lace up?

“The last couple of months to sneak in a run has been very tough. I do two-mile workouts in the hotel. I go down the hall a faster speed and then jog back again. I have run over 100,000 miles in my life. And I don’t know what a ‘runner’s high’ is. Every competitive mile I ran I threw up after. It’s just something I do. I know I am a junkie. I know that if I missed it, it would muck up my day. And my age group gets easier because there are fewer entrants every year!”

When Dern missed out on the Olympics he signed up – against his family’s wishes – for acting classes in Philadelphia. He was quickly transferred to New York to audition for Lee Strasberg, Elia Kazan and Cheryl Crawford at the Actors Studio. On his second day, Marilyn Monroe sat down beside him and inquired: “You’re (Kazan’s) new wonderkid, aren’t you?”

It’s a lofty education and background for a man who spent so many years in dusty buckskin.

“When Mr Kazan and Mr Strasberg permitted me to go to Hollywood, the only thing they’d cast me in were westerns,” recalls Dern.” All I could get were hicks. What are you going to do? So I took a lot of my resentment and put that into the work. If there was a point of transition, it came in 1969 when I had spent many years as an actor. My mother phoned me and said ‘When are you going to be in something I can take father’ – that was my grandfather – ‘to see in a movie? You constantly do these westerns and you’re always the bad guy. You’re in this movie, another western, and it’s coming to our town. And I bet I can’t go and see it.’ I said: ‘Mom, It’s not a western.’ She said: ‘What does this title They Shoot Horses Don’t They mean then?’ But she never saw it. She passed soon after.”

But there was a poet in the family?

“Right. I had this uncle, Archibald Macleish, Pulitzer Prize-winning poet. He had a free pass in the family. And I said ‘why does he get this free pass?’ ‘He’s an artist. He’s a man of letters,’ they said. They never came around. My dad died in the first year I was an actor. My mom died when I was doing The King of Marvin Gardens. I have sister and a brother who are alive and they finally understand it. Now there’s a lot of talk about Nebraska.”

“Back in 1969, film became about the examination of behaviour of people who were much more on the edge. What did Peter Bogdanovich do in The Last Picture Show? He examined those sorts of lives. It’s the same thing that Alexander does. It’s a tribute to a time we got away from over the last 25 years. We got away from it a result of the technological wizardry and the ability to make money fast: a $100 million in a weekend: wow. But as brilliant as those films are, you miss the people. Alexander has a tendency to celebrate personalities, especially older people. He’s used to that in his life. Both his parents are alive and are in their 90s. He still lives in Omaha. He’s connected to them. This is a monument he has built in their honour.”

I’m so glad that Bruce Dern, after all these years, is finally the bookies’ favourite to win an Oscar. As he notes, there have been plenty of near-misses and not-to-bes along the way.

“The Great Gatsby. All the pre-publicity said it was going to be enormous. It wasn’t enormous and it’s not enormous now. It won’t ever be enormous. He never wrote that book to be a visual experience. How could you ever have got that last paragraph on the screen? Putting that on screen was like showing the face of Christ on screen. You can do it. But it is always going to piss some people off. People eventually discovered Silent Running. Nobody ever discovered The King of Marvin Gardens. Smile was never discovered. There are so many movie I was associated that were never discovered.”

With this in mind, I wonder what he told his then nine-year-old daughter Laura when she announced her intention to follow him into the family business?

“I told her it’s an endurance competition. It’s like a marathon: you don’t start racing until mile 16. It’s not going to happen right away. It will take a long time. Take risks and do roles that put you on the edge. And learn to dance away from problems behind the camera. It’s not personal. Everybody wants to go home at the end of the day, so they can see Chelsea play Man Utd.”

Normal People: The origins of Connell and Marianne
8