Irish film-maker investigates the rise of land grabbing in Cambodia 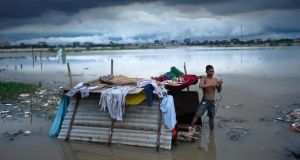 A Cambodian Spring: there are an estimated 830,000 victims of land grabbing in Cambodia

Last February Cambodia’s ruling party – the Cambodian People’s Party – claimed all 58 elected seats in the senate, a result that does not bode well for that country’s upcoming general election in July.

A Cambodian Spring, Irish film-maker Chris Kelly’s account of the protests that swept the country following the re-election of prime minister Hun Sen in 2013, could not be more timely or, indeed, depressing. Hun Sen, who has been in power since 1985, has recently vowed to stay in charge for another 10 years.

Kelly is an award-winning video-journalist who has covered slavery in the Thai fishing industry, the Rohingya refugee crisis, and rebel armies in South Sudan for outlets including the Guardian, Al Jazeera, and France 24.

“I had been to Cambodia in 2006 as a tourist and wanted to go back to make a film there, so I did some research and came up with the story of the land grabbing,” says Kelly. “I went out in 2009 for a research trip, with development funding from NI Screen and the IFB, met the people we see in the film and the research trip turned into six years of filming.”

Crafted over some nine years including post-production, A Cambodian Spring chronicles the campaigning of Toul Srey Pov and Tep Vanny, two of the estimated 830,000 victims of land grabbing in Cambodia, as well as the political evolution of the Venerable Luon Sovath, a Buddhist monk and human rights activist.

“I first met the Venerable Sovath at a press conference in Phnom Penh shortly after I had arrived in Cambodia,” recalls Kelly. “He was filming with a little Nokia camera phone – way before the days of smart phones – and I thought he was a very interesting person. He was filming everything and I thought it would be interesting to film a film-maker, to be able to reflect on the role and importance of documentary film and filming in the wider political context. He used to paint the story of Buddha on the walls of his pagoda, and when his family and villagers were arrested and shot during a violent land grab, he put down his paint brushes and picked up a camera. It seemed to him such a natural response to the situation, and he continues to this day to film and document and put out his films over Facebook and other social media.”

Monks have a history of social engagement in Cambodia; many Buddhist leaders were involved in the 1942 Umbrella Revolution, an anti-colonial, non-violent protest movement.

Loun Sovath is the best-known monk activist from the contemporary Independent Monk Network for Social Justice. His blog on YouTube, which calls for socially-engaged Buddhism, has repeatedly addressed deforestation, women’s rights and land rights. His Facebook live streams routinely attract more than 200,000 viewers across Cambodia.

“In 2009, businessmen and local authorities evicted 175 families from my village,” recalls Sovath. “Both my brother and my nephew were shot and injured. The people lost their land. They lost their rice. Many were taken to prison. The police and the company: they take the land from the farmers. I wanted to protect the farmland with my brother and my village. I wanted to stop the government and to get justice for the farmers. Buddhism must educate and help the people.”

Sovath was ordained as a monk in the early 1990s, at a time when it was still illegal for men under 50 in what was then called the People’s Republic of Kampuchea. Many of his 10 siblings had already been pressed into service by local militias. One of his sisters and two brothers were killed.

“My father was worried about our family and how to keep us safe,” recalls Sovath. “He sent me to the temple to become a monk as an escape from joining the army. Over 90 per cent of Cambodia is Buddhist so families with many children often send children to the temple. And also, in Cambodia, poor people did not have any opportunity or money for education. There was no way or no place to study apart from the Buddhist temple.”

Land grabbing is a complex and systemic business in Cambodia. Many of the projects that have displaced Cambodians are owned by the ruling party. Senator Lao Meng Khin, a close friend of the prime minister’s, for example, controls more than 7 per cent of Cambodia’s total land area through Pheapimex, a company run by Khin and his wife. The 2013 protests brought together displaced farmers, opposition politicians from the Cambodia National Rescue Party (CNRP), and garment workers. Garment production accounts for some 700,000 jobs and 80 per cent of national exports, through orders from international brands like Gap, H&M, Adidas and Marks and Spencer. Striking workers from the sector, which pays significantly below a living wage, have been repeatedly subjected to violence.

“The protests in 2013 began because the Khmer people and the opposition party want to know the real result of the election,” says Sovath. “But the government said no. Anyone who opposes the ruling party – journalists, human rights activists – is accused of being a revolutionary. Because politics in Cambodia is not respectful of human rights or people.”

“It’s not justice,” he says. “But the ruling party in Cambodia controls everything. They control the army, the courts, the police, the elections. We were supposed to get democracy 20 years ago. But without help from the EU or the UN or the US, there is no hope for democracy and the Khmer people.”

A Cambodian Spring opens May 4th

Ennio Morricone, genius: ‘I didn’t know I was doing anything new or revolutionary’
4

Married life on the road: a tale of two vagabonds
9