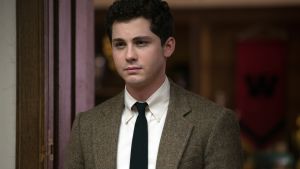 Logan Lerman as the rebellious student Marcus in Indignation

Arriving hot on the heels of Ewan McGregor’s American Pastoral, Indignation ought to allow us to crack that you wait ages for a movie based on a Philip Roth novel, then two come along at once.

Except that nobody waits around for movies based on Philip Roth novels.  Even the great Ernest Lehman – the scribe behind North by Northwest and The Sound of Music – couldn’t successfully translate Portnoy’s Complaint to the big screen. Kramer vs Kramer writer-director Robert Benton’s 2003 adaptation of The Human Stain, too, stands as a lesson in wrong-headed casting choices and unintentional hilarity.

Against the run of play, Ewan McGregor’s film, though workmanlike, retained the narrative backbone and (suddenly topical) political uncertainty of its source novel. Long-time Ang Lee collaborator James Schamus does even better with his directorial debut, Indignation.

During the Korean War, Marcus (Logan Lerman, in a star-making turn) – a working class, Jewish student from Newark – wins a scholarship to a university in Ohio. He is the first person in his family to attend college and his departure is a source of anxiety for his father Max (Danny Burstein), a kosher butcher. His mother (Linda Emond), in turn, frets about his father.

Once on campus, Marcus is quick to dismiss the advances of the college’s Jewish fraternity, and quick to fall for the charms of the enigmatic, sophisticated Olivia (Sarah Gadon). Confused by her sexual advances, he mouths off to roommates, bringing about an altercation and the attentions of the Dean (Tracey Letts).

The Dean’s conservative values and Marcus’s, well, you’ve seen the title, produce an incredible stand-off in which the latter quotes liberally from Bertrand Russell’s essay “Why I Am Not a Christian”. There is some brilliant nuanced writing here, as Schamus – who wrote, directed and produced – simultaneously refuses to demonise the ‘Crusty Old Dean’ or to adulate his passionate young protagonist.

Schamus is rather less successful with the damaged Olivia, leaving the talented Sarah Gadon to occupy a space marked ‘Object of Desire’, a role she has already essayed twice (in The Girl King and The 9th Life of Louis Drax) this year.

Meek’s Cutoff and The Bling Ring DOP Christopher Blauvelt is similarly hampered by the small, contained spaces in which the film is set. This is a terrific filmed play but no one would describe it as cinematic.  A compelling drama, nonetheless.