Neasa Ní Chianáin unquestioning, affectionate documentary about Headfort School in Co Meath could do with some old-school discipline

The official trailer for 'In Loco Parentis', a documentary about Ireland's unusual boarding school for ages seven to 13 from film-maker Neasa Ní Chianáin. 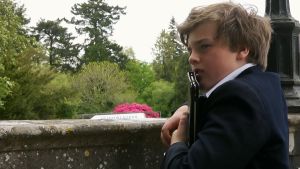 Eleven-year-old Ted Lyons, who has severe dyslexia. For his parents, “that year in Headfort was about Ted getting back his confidence”

The prep school seems to belong to an era when children were escorted by successive wet nurses and nannies for brief, infrequent inspections by their parents, before being packed off to school, and finally dispatched to the frontline of some far-flung colonial conflict, from whence they might never return.

Thus, it comes as something as a shock to discover that Headfort School, nestling just outside Kells in Co Meath, continues to board children as young as seven. After all, most right-thinking, modern parents would not willingly miss out on the formative years between seven and 12, right?

This anachronistic notion becomes an unaddressed elephant in the room for this warm, unquestioning portrait of the school. This is not, perhaps, the uncritical film we might have expected from director Neasa Ní Chianáin, whose investigation of the poet Cathal Ó Searcaigh was so meticulously calibrated.

It is, however, a very endearing portrait of John and Amanda Leyden, the chain-smoking, wise-cracking educators who run Headfort, and whose proximity to retirement age lends the project a certain wistfulness.

Like the crumbling bricks that house them, this most affable married couple seem to belong to times past. Unhappily, we do not get to know any of their charges so well. Were it not for sad Eliza and blossoming Ted, the children are mostly bouncy, undifferentiated, and, worse, completely aware of the camera.

The Leydens may be child-centric, but the film loses its kids in a kindermass which allows for few story arcs and little sense of incremental learning or improvement, a narrative strand that has proved vital for such similarly themed projects as Nicolas Philibert doc Être et Avoir.

One longs, too, for the rigour of Fred Wiseman’s institutional studies, wherein plasterwork dries and minutes from the last meeting are read aloud. Mirjam Strugalla’s casual edits makes for a Wiseman-friendly run-time, but without the focus, In Loco Parentis remains a lovely, likeable picture, but one that, ironically, might have benefitted from some old-school discipline.