Room sweeps the board with seven awards while Brooklyn takes two 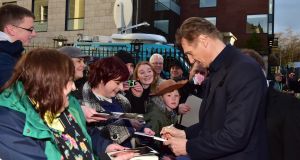 Liam Neeson signs autographs for fans as he arrives for the 2016 Irish Film and Drama awards at the Mansion House in Dublin. Photograph: Michael Chester/PA

The 2016 Irish Film and Television Awards took place at The Mansion House on Dublin’s Dawson Street on Saturday night, turning stars purple with cold in the typically wet and blustery Irish weather.

The Ifta Film & Drama Awards ceremony will be broadcast on TV3 on Sunday, April 10th at 9pm.